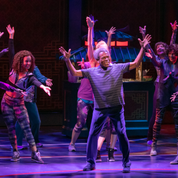 Half Time--Generally Entertaining With Grand Cast

The pleasant and generally entertaining new musical “Half Time” which perks up during the second act just had its northeast premiere at the Paper Mill Playhouse before it is scheduled to arrive on Broadway in the near future.

The show is based on a true story about a group of over 60 seniors who are recruited by the NBA’s management to actually be the stars of the half time show. Only here they are not performing for the Nets as was the case but a fictionalized team named The Cougars.  They are to be trained by the coach Tara (Haven Burton) as directed so by the snarly head of management Alison Prager (Tracy Jai Edwards.) The goal is for Tara to teach these “over the hill” group of  eight women and one man hip hop. However, the seniors think they will be performing standard dances when they signed on. 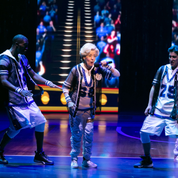 What works best in the show is the mostly superb cast who are Broadway veterans several having  created some memorable characters through the years.

The wonderful Andre De Shields (“The Wiz” “The Full Monty”) whom I remember vividly doing the show stopping “Big Black Man” from “Monty” still has lost none of his zest for dancing. He can still move around with the best of them. He has a charming number “The Prince of Swing” written by the late great Marvin Hamlisch who contributed a few songs to the show. De Shields portrays a lonely widower who has spent most of his time in his daughter’s basement before taking this job on.

Lillias White who won a well deserved Tony for “The Life” is a hoot as the outspoken Bea who tries to convince her granddaughter Kendra (Nkei Obi-Melekwe) that her boyfriend is a lout. She has the lovely number “Princess” she sings to Kendra about how much she enjoyed being a part of her life  through the years. 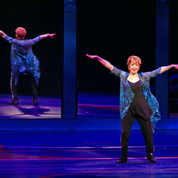 The always welcome Donna McKechnie portrays the not so self assured Joanne whose claim to fame was starring in some awful sounding musical and then marrying a famous urologist. In a nod to McKechnie from her Cassie role in  “A Chorus Line” the panels from the rear of the stage turn with mirrors appearing where she breaks into her famed “Music and the Mirror” from that show. She still exhibits the vitality that she had when she opened in that show decades ago.

Georgina Engel with her whispery voice is the kindergarten teacher Dorothy who is the only senior who actually has a love for hip hop and her idol is the late Tupac. I am not sure if I completely believed this and found her one number “Dorothy /Dottie”  which should have been much better falling flat. It does not seem to matter to the audience  for the fact that is she is most definitely a crowd please was evident by the cheering she receives by just making a few hip hop moves which to me came across a bit silly.

Nancy Ticotin brings the dynamic bounce to the show with her fiery “Como No?” dancing with her 25 year old hunky new boyfriend (Alexander Aguilar). Lenora Nemetz is  humorous as the Mary Kay salesperson and Kay Walbye is funny as the not so legally blind Bea. Lori Tan Chinn is both comical and touching as the least prolific dancer Mae whose husband is in the throes of what might be dementia. She has a beautiful number “The Waters Rise” which smartly opens the second act. 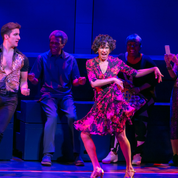 The book by Bob Martin (“The Drowsy Chaperone”) and Chad Beguelin (“Aladdin”) is serviceable and improves in the second act.  Cuts should be made to the exceedingly overlong first act before considering a Broadway transfer. It is later in in the show when you get to know more about the performers’ personal lives and thankfully nothing is belaboured.

Even the score by Matthew Sklar (music) and Nell Benjamin (lyrics) is much improved later in the show. The positive attitude the characters developed through their determination shines brightly in  “New Point of View” a rousing number in which they all let loose.

Director/choreographer Jerry Mitchell is the perfect fit for this type of show keeping it moving a good speed and having several of the leads get their time in the spotlight.

Despite some stale jokes and that sometimes tedious first act, those veteran performers still have it and they alone are worth the price of admission.

PHOTOS: JERRY DALIA
Posted by TheaterTime at 11:07 AM