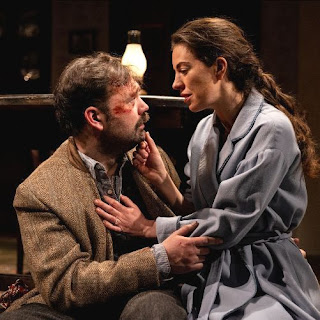 It is always amazing how so many plays from the early part of the 20th Century are so apropos today. Case in point is D.H. Lawrence's "The Daughter-In-Law" being given a first rate production by the always excellent Mint Theater Company. Dealing with marital relationships, social class, strikes and sexual mores, the 1913 play feels so fresh thanks to Martin Platt's lively direction and the sublime cast. I must say that I was a bit concerned knowing that the dialect they speak which is from the British Nottinghamshire area is not the easiest to comprehend, There were just a few moments that I did have some difficulty but you can with a little effort get back into the phrasing, and it does not deter from the enjoyment of the play.

Mrs. Gascoyne (a terrific Sandra Shipley) who lives with her son Joe (Ciaran Bowling) is visited by a neighbor Mrs. Purdy (Polly Mckie) to be told that Mrs. Gascoyne's other son, Luther (a knockout performance by Tom Coiner), has gotten her daughter Bertha pregnant. Luther is now married to Minnie (a delightfully cunning and independent Amy Blackman). Purdy will forget this if she is paid forty pounds. WhileMrs. Gasoynemay have the money to do so, she informs Mrs. Purdy to visit her son and confront him. Mrs. Gascoyne is a sharp, domineering and overprotective mother whose austere personality only build as the play goes on. 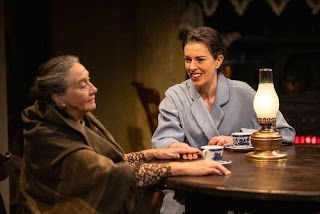 Joe loves his brother dearly and rushes off to tell him of what has occurred before Minnie finds out. Of course, it is only a matter of time before Minnie is aware of what has happened. Her reaction and what she eventually does is marked by staunch feminism. When you first see Luther he is covered in black from working in the coal mines. Minnie is of another social ranking which is clear even in her better speech patterns. She is a shrewd and self-reliant woman not afraid to express what she wishes.

Mrs. Gascoyne becomes even more possessive and her disdain for Minnie becomes more evident as the play moves on. Why Minnie seems to still have great affection for Luther is not clear especially after her taking leave for a while. But it does not really matter. She has proven her independence as a woman and Luther becomes aware of this. His anger at what he does to a gift she has bought for herself when she was away is thunderous and Coiner's rage is incredibly believable. When you destroy the one thing that a person you supposedly love it becomes even crueler. 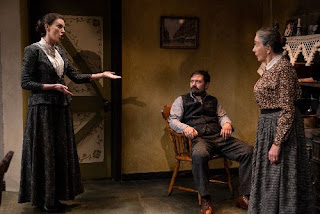 As I mentioned the performances are all top notch especially Coiner's and Blackman's. As boisterously angry as Luther is towards Minnie there is no doubt she knows how to handle him. Watch the part (earlier in the show before she leaves) where she removes his boots when he returns from a day in the mines. Strangely, it is a tender moment that you would not expect.

The set design by Bill Clarke is very authentic and the ease of changing the set from Mrs. Gascoyne's home to Luther and Minnie's is done perfectly with little fanfare.

I would suggest you listen very carefully to the actors so the dialects become less daunting. It is well worth the effort. The play which was not produced until the late 60's is a joy to watch.

Posted by TheaterTime at 4:49 PM No comments: 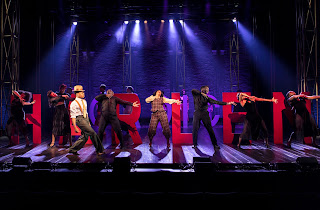 While I never read the 1931 novel "Black No More" by George S. Schuyler about a machine that can turn blacks into whites as a remedy to race relations,  I was most definitely looking forward to the new musical of the same name presented by The New Group at the Signature Theater. While not severely disappointed, I was less than impressed. And one of the reasons that makes this hardworking show not soar surprised me even more. Will get to that in a bit.

The show begins on a somber note on a large empty set (Derek McLane is the set designer) with a Dr. Crookman (Tariq Trotter) announcing that after studying skin diseases he thought it would be quite a feat if someone could turning a black person white. In his warped way of thinking this would resolve race problems in America. Immediately afterwards,  this sour beginning turns into a celebration of the Harlem Renaissance with the large cast robustly singing "This is Harlem" and dancing to the gymnastic movements of the always energetically appealing choreographer Bill T. Jones ("Spring Awakening.") Several of the leads are introduced which includes Max (Brandon Victor Dixon) the black man who decides to be transformed in white; his friend Buni (an exuberant Tamika Lawrence) and the singer and part narrator Agamemnon (a fine Ephraim Sykes). 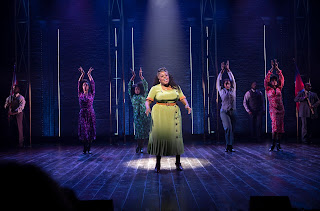 What is the deciding factor for Max to sit in what looks like an old barber shop chair which makes the conversion, is his going into a nightclub  only to be called various epithets by a white fellow from Atlanta namedAshby (played with terrific nastiness by Theo Stockman) there with his lovely looking sister Helen (Jennifer Damiano). Although both she and Max form a mutual immediate attraction, she, too, indulges in a vile insult to appease her brother.

What happens much to the dismay of members of Harlem is expressed by the always welcome Lillias White who portrays Madame Sisseretta, the hairdresser. It seems that many blacks have decided to go the same route as Max which destroys Harlem and the black culture. 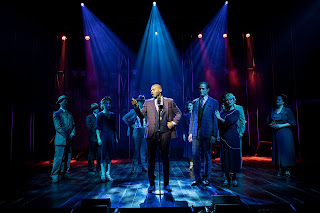 Eventually, Max goes to Atlanta now as a white man and at a celebration (one of the best moments in the show) is unsure whether to join in with the whites or blacks. It is a heartfelt moment and one can easily understand his confusion. He meets Helen and and eventually  Ashby and their virulently racist father Reverend Givens (a very good Howard McGillian). He attends a rally berating the Black No More machine and how it is science that is the real culprit. He does eventually marry Helen but things become worrisome when she finds out she is pregnant. The musical moves from Atlanta to New York repeatedly for too many production numbers which add little to the impact on the show itself.

One big  issue with the musical is not the book by John Ridley, but the fact that it is oversaturated with about 30 songs (music by Tariq Trotter, Anthony Todd, James Poser and Daryl Waters with lyrics by Trotter.) The melodies all seem to sound the same and the lyrics that I was able to understand were intelligent and meaningful though whether it be the orchestrations or the singers, a good deal of them  undecipherable. A score to any show should enhance the book not deter from it. There are times, sad to say many times, that I almost groaned when I heard the first note of yet another song. 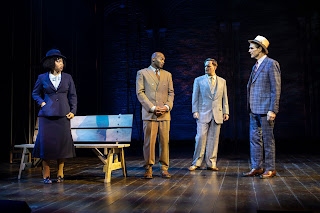 My biggest disappointment was with Dixon. I have admired him in all the previous shows I have seen him. Yet here I was more than surprised how lackluster he was. His singing was up to par but there was so very little emotion in his performance. When he first turned into a white man he had this rather "cutesy" grin which did not work and throughout there was no distinctive quality to his persona in any of his scenes. Take, for example, when he is attending the racist rally of Nordica spewing hatred comments about blacks. It should have been delivered with a fiery oration not with so little passion. Not sure if this was director Scott Elliot's interpretation of the role or Dixon's but the performance falls grievously flat.

There is a lot of fine material here and if songs were cut and there was less choreography which also  became repetitious, however good,  it could have amounted to a memorable show.  Because the story line is so diluted by the score, the show is instead fascinating but never involving.

Posted by TheaterTime at 4:38 PM No comments: 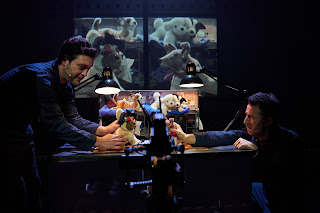 Space Dog--Great Visuals But Not Much Else

"Space Dogs" a new musica  at the MCC Theater written and performed by Van Hughes and Nick Blaemire is certainly very original if less than successful. It tells the story of the Russian dog, Laika, one of the first dogs to travel into space and first dog to orbit the earth. This was long before long before any astronauts were sent up. The idea was that of a Russian scientist back in the 50's. We don't know the name of the scientist but see his photograph with his name covered up (until later in the show.) He is basically known as the Chief Designer.

Unfortunately, the musical which could have been much better is rather silly, jam packed composite of information. I am not so sure of its success on a commercial stage but with certain revisions could play very, very well in a school auditorium. It could be a great history lesson for kids if it was presented in a clearer manner than it is here. It was not always easy to follow even as an adult. 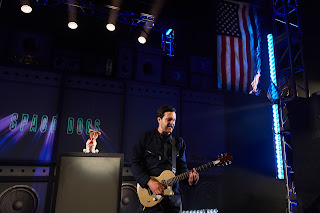 Both Hughes and Blaemire who wrote the sometimes catchy though mostly repetitive rock score (I did like Blaemire's number in which he sings as Laika decrying why he was lied to and left to die in space) did put a lot of work into the show. There were a number of facts that I was never aware of. It seems the Russians gathered up forty stray dogs for space exploration. Twenty four survived. And why the Chief Designer was placed in the Gulag was never clearly discussed. The writers/actors seem to want to move along too speedily with more and more details and including such characters as Stalin, Khrushchev, Wernher von Braun, Lyndon Johnson, etc. What also was fascinating was after the war when the German-American von Braun came to America about 1600 German scientists also eventually came.

There is a cute touch in which Laika writes in his diary about how he rather be going with these strange men who capture him and other dogs (the first domesticated animal) rather than be on the streets. 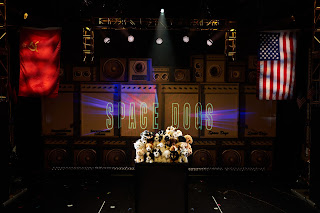 With Blaemire under the American flag on the right and Hughes representing the USSR on the left they try to get an audience cheering section to get into the action although it amounts into very little and falls flat although most of the staging by director Ellie Heyman works well.

BUT the best part of the show and one that makes a definite impression are the amazingly superb projections by two wizards, namely Stefania Bulbarella and Alex Basco Koch. Truly among the best visuals I have seen in years in any show whether be it on or off Broadway. I won't spoil it by discussing what they have created but it is quite unique. Along with both of them I must comment on the adorable puppets and props created by Amanda Villalobos. I especially loved the canine beauty show along with the shimmering curtain they "perform" before. Wilson Chin's set design blends in very well with Villalobos's work. 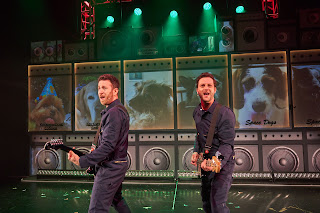 Both Hughes and Blaemire work very hard, although Hughes could take down some of his antics a bit, the show just never really takes off as well as I hoped it would. While it only runs about 90 minutes I must say I was getting a bit itchy after 45 minutes.

And not to burst your bubble, but if you are one of the lucky audience members to catch the adorable stuffed dogs thrown into theater at the start of the show, don't get too excited. You have to return them shortly afterwards or as Hughes warns, "be sent to the Gulag."

Posted by TheaterTime at 5:36 PM No comments: