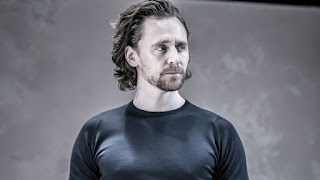 The opening scene of Harold Pinter's incisive "Betrayal" being given an absorbing and strikingly icy production at the the Jacobs Theater has the three actors (Tom Hiddleston, Zawe Ashton and Charlie Cox) in what looks like a final tableau. Staring out in uncertainty with barely a move. Contemplation? Sorrow? Both can apply.

Pinter has written his memorable play staged with deliberate concentration by Jamie Lloyd in reverse chronological order. Only the second scene is a bit later but all others go back over a nine year period in the marriage of Robert (Hiddleston) and Emma (Ashton). The opening has Emma and Jerry (Cox) who were lovers for seven years meeting rather uncomfortably having drinks. Immediately you notice how the superb Lloyd has distanced the actors as they speak to each other. Each on a chair (basically the only sets other than a snack table). Yet, a we go backward in time they are closer together.  Both search for words and while not speaking--you are aware of Pinter's famed pauses which seem even  more prevalent here--seem to squirm and almost comically search for the right words which don't come. Looming over them  against a nearly blank panel (design by Soutra Gilmour) is Robert. Stoic and ramrod straight he just looks with plaintive eyes. Jerry is astonished to hear from Emma that Robert has been cheating for years while she herself has been having an affair with the unseen Casey an author whose agent is Jerry and publisher Robert. 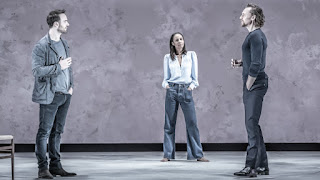 The second scene is intentionally humorous as later Robert tells Jerry he has known of his and his wife's affair for four years with Emma in the background staring at them. Why does Robert decide to still continue his friendship with Jerry? Because of his own betrayal? There is no doubt that Robert still is in love with his wife despite the fact that she herself tells him she and Jerry have been seeing each other for seven years. Is the "stiff upper lip" British expression what Pinter is satirically mocking?

One of the most penetrating scenes comes later in the play when Robert and Emma plan on a trip to the Italian town of Torcello. She is reading a book by an author whose agent is also Jerry. Robert laughing states he does not want to read it because of its dealing with betrayal. It is a sadly humorous comment and you are left wondering if you really care about any of these people but strangely you form an attachment.
.
Unlike the last uneven revival this being the third I have seen (never saw the original production) the three actors are magnificent. Each comes under a microscope and you watch one speaking while keeping an eye peeled out for the facial reactions and body movements of the other two. 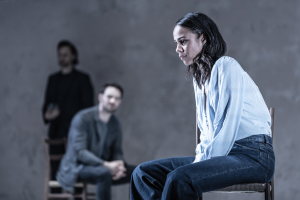 Lloyd creates the most subtle scenes of Robert carrying their sleeping child on a revolving stage  while all three major characters are holding hands and then slowly they lose contact with one another.

Hiddleston comes across in a low keyed interpretation but not without a taut feel which comes to play in a scene where he attacks a melon with such force that you would think it was going to fall off the plate while having lunch with Jerry.

Cox is always smiling yet despite some of the scenes he plays as a relaxed fellow in others there is a pinched smile with concentration of what to say that would be appropriate.

Ashton is stunning as the gorgeous wife and lover. She seems so controlled yet there are moments when her deceivingly,  playful nature dissipates into a stiff disposition which even her casual shirt overhanging her jeans (costumes by Gilmour) can’t hide.

Clearly, "Betrayal" is not for everyone. It is very slow moving but if you go with it, it will linger with you as you think about your own life and how various aspects of betrayal come have a ruinous effect whether with a friend or lover.


Posted by TheaterTime at 7:24 PM No comments: