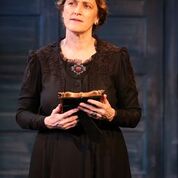 Lady G: Plays and Whisperings of Lady Gregory--Irish Rep Again is a Joy to Visit

When you think of famous Irish playwrights, I doubt if Lady Augusta Gregory will be one of the top contenders that comes to mind.  Shaw,  Joyce, O'Casey,  sure. Yet, she was quite a prolific playwright producing over 50 plays based on her wit and verve as you will see in the frolicsome new play based on her writings with additional material written by the iconic director in resident at the Irish Repertory Theatre (if he will permit me to call him that) Ciaran O'Reilly. O'Reilly is one special director who can turn a work dealing with a woman who for many is obscure and make her quite interesting. A large part of this is due to the simply incredibly talented cast of four. At the curtain call it was hard to imagine we were watching just four people on stage playing a number of roles. 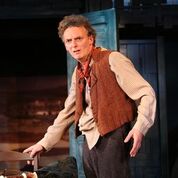 The play starts off quite amusingly with Gregory (Una Clancy) announcing that it has been 90 years since she has returned. Jokingly she informs us that she has a contract with the Irish Rep to have her plays produced and might even star in them,

The play does have a slow start with information that might not be of much interest, such as, describing the acres of land around her house and the various dogs. However, it is O'Reilly who infuses it was some very funny lines like her speaking about its resembling "Downton Alley." There are only about two anachronistic terms but provide the right amount of laughter. I especially liked her comment about "going viral." She introduces us to her nurse, Mary Sheridan (a beautifully nuanced Terry Donnelly) who begins by singing a sweet Irish number about the French landing on the shores to save Ireland. It is always a pleasure to see Donnelly who was in the superlative "O'Casey Cycle."

There are a smattering of other characters mentioned who really don't mean very much unless you have studied Irish history but they are kept at a minimum and don't influence the storytelling. One of the most famous Yeats and well played by a contemplative James Russell would always call her Lady Gregory once she married the well to do Sir William who was a member of the Dublin Parliament. It is evident Yeats had strong feelings for our heroine but kept them at bay. Russell is such a accomplished performer going from the mild mannered Yeats to a scene from Gregory's play which is presented later in the first act. Suddenly this actor turns into a rambunctious curmudgeon. 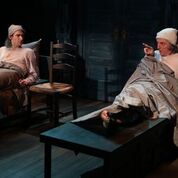 Gregory goes on to speak about her travels all over the world with Sir William and her affair on one of the travels. When returning back home she starts to take a great interest in the theatre, and it is informative to know how difficult it was to gain a patent in Dublin. It is hampered by the snobbishly wealthy Anne Horniman (Donnelly) whose claim to fame was her grandfather inventing the teabag. The tete a tete between the two women (loved Gregory's calling her a "shilling in a tub of electrified water") comes to an end when Gregory finally gets a patent and a number of plays are finally produced thanks to Gregory using her own money.

At the conclusion of the first act, there is a scene from one of Gregory's plays "The Workhouse Ward" about two old very feisty neighbors who find themselves side by side in a what was then called a poor house. While Rusell is one of the men, John Keating is a perfect ruse as the other one. To say they bicker is a mild understatement. A bit of a problem is that for this scene both actors adopt a heavy brogue which does not always make their dialogue quite clear but they are having a grand old time. It is a joy watching them. And one of the most classic lines is "it is better to be quarreling than to be lonesome." 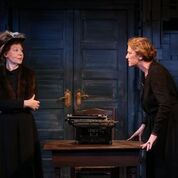 The second act is livelier with Gregory's admiration and friendship for playwright John Millington Synge whose most famous play "The Playboy of the Western World" was met with shock from the Irish audiences who found it obscene. Gregory was instrumental in bringing it to America where it was met with much disapproval for the same reasons in New York. A combination of stink bombs and rosary beads were flung onto the stage. Thinking of that religious symbol used in such a fashion must have been the height of indignation for those audience members. What saved the play is her meeting Theodore Roosevelt who supported it. To think that a US President at that time in our history supported something deemed vile is quite a credit to him.

What makes Gregory such an interesting playwright is the scene from her play that ends the show "McDonough's Wife." While "Workhouse" was almost slapstick in its humor this one is solemnly serious and moving. It is played to the hilt with ravaged emotion by Keating who just found about about the death of his wife. What makes this scene even more affecting is the small downstairs theatre where the show is playing. Only a few rows separate you from the actors. The agony and despair and anger he displays towards the townspeople who considered his deceased wife an outsider shows on his grieving face and how he copes with the situation is remarkable. One of his last lines reminded me of the last line from James' Joyce's masterpiece "The Dead." If you know that brilliant  film you will remember it seeing this show. 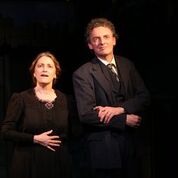 Again, the entire cast performs beautifully. There is not one minute you don't have the feeling you might have crossed the Atlantic and sitting at a small Dublin theater. They switch from character to character with expert ease.

Charlie Corcoran has designed a cozy scene with a fireplace and off to the side of the outside of the house is a large trunk of tree with initiats of famed Irish writers.

It is always a joy visiting the Irish Rep and again my admiration for their work has not diminished.

PHOTO CREDIT: CAROL ROSEGG
Posted by TheaterTime at 4:48 AM No comments: