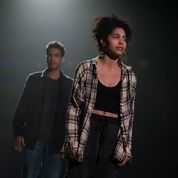 Sanctuary City--Slightly Touches on Issues Without Much Conviction

While I never saw playwright Martyna Majok's Pulitzer Prize winning play "Cost of Living," I was fortunate to see her excellent "Ironbound" with a bravura performance by Marin Ireland who will be returning to Broadway this season.

Unfortunately, I was not so taken with her new play, "Sanctuary City," that skims the surface. It is a New York Theater Workshop production playing at the Lucille Lortel.  The two major characters (a third appears in the latter part of the one hour forty minute play) never address each other by name. Jasai Chase-Owens portrays B (as in boy?)  and Sharlene Cruz is G (girl?).   B is concerned that he will be deported because his mother is not a citizen. We know very little about her except for some inexplicable reason she goes back to her country of origin leaving the high schooler alone in the apartment. Already, this does not make a lot of sense for it is hard to believe that no one from the school would be aware of this. The time frame is 2006 and there is a brief talk about the horror of 9/11. G's mother has just become a citizen though has a negative track record with men in her life. G's current stepfather has beaten her so she wants to stay with B while his mother is still around. 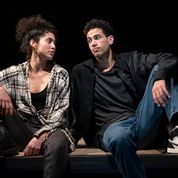 An extremely distracting and annoying occurrence is the clipped dialogue both characters have along with repetition of dialogue and lights flashing on and off with a clicking sound to denote a change in scene. Not sure if this was the playwright's decision or the director Rebecca Frecknall.  I could not understand the reason for this since it should be happening during a  scene change which in many cases  there really is not. This goes on for a about 30 or so minutes. There is a great deal of insignificant dialogue and what makes the play never really involve the audience is that the two actors while adequate have little chemistry. 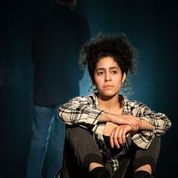 G goes off to college and returns  about 3 1/2 years later wanting to marry B so he can remain in the States. G did bring this up earlier in the play but it appeared to be nothing more than just what a teenager thinks could help without thinking it through A thought that kept going through my mind was "why wait this length of time" to return and again bring up this proposition. When B asks her that very question she looks at him with a blank stare before finally answering "guilt." Probably guilt because she feels she should have done this earlier. Still her answer makes no sense and it is never pursued by the playwright as it should have. 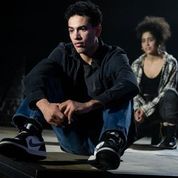 The latter part of the play we are introduced to Henry (Austin Smith), B's boyfriend who wishes he could marry him so he could remain here. There is a conflict that results between Henry and G that never rings true. And it also makes little sense that G would object to this relationship when it is apparent that she and B as indicated never had a sexual one. It always appeared they were no more than friends. Majok touches on gay marriage not being accepted which we know was the case at that time.

Smith is also not particularly convincing in the role and seems to be struggling to find what his character is all about. This is not completely the actor's fault but again has to do with the dislocated characters that Majok has created.

What sums up this weak and talky play is the last bit of obscure dialogue from B: "when did you," "decide," "what did you have in," "when did your."  Need I go on?

Tickets are available at the Lucille Lortel Theater 121 Christopher Street.

Posted by TheaterTime at 3:16 PM No comments: