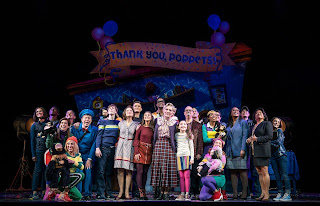 Rob McClure was nominated but shamefully never won a Tony for his triumphant portrayal of Charles Chaplin in the underrated musical "Chaplin" several years ago. He certainly will be in the running again this season for his hysterically funny performance in the wonderfully appealing and family oriented musical "Mrs. Doubtfire" at the Stephen Sondheim Theatre based on the film of the same name. Originated on screen by the incomparable Robin Williams it must have been daunting for McClure to step into that role so associated with the late, great Williams. But McClure being such an incredibly talented performer makes the role his own. Yes, the Scottish accent and look are there but he does not replicate Williams. As Daniel Hillard before he becomes the fictionalized Mrs. Doubtfire, McClure comes across as a lovable lunatic playing with his kids like a child himself but also has a beautiful vulnerability he displays in various scenes. His transition from both personalities is done with such expertise that he is quite amazing. 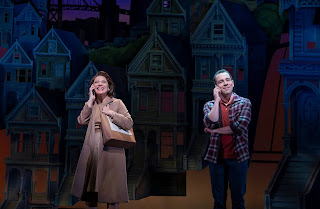 Daniel is a voice over actor more unemployed than not. He is a loving father to his three children Christopher (Jake Ryan Flynn,) Lydia (Analise Scarpaci) and Natalie (Avery Sell). The three actors are simply marvelous and believable. Scarpaci especially has a strong and lovely voice and Flynn is a comic find. The always excellent Jenn Gambatese plays the wife and mother Miranda who is starting a new clothing line. As much as she loves Daniel she cannot deal with his being constantly being unemployed nor his antics with the kids who love every minute of his silliness. For her it is like having another child. Things get worse when he throws Christoper a birthday party unbeknownst to Miranda and inadvertently hires a stripper. She finally files for divorce. The scene in the courtroom is beautifully moving as McClure practically begs the judge to reconsider his judgment that he only be allowed seeing his children on a Saturday with supervision.  His plea "I Want to be There" is a gorgeous ballad. That courtroom scene was reminiscent of the almost forgotten film "Penny Serenade" wherei  Cary Grant makes a similar plea. Impossible to not shed a tear at that moment in the film and just as impossible here. Wayne and Karey Kirkpatrick wrote the versatile score filled with lovely ballads along with catchy, lively ones in the production numbers. And both Karey and John O'Farrell's book is heartfelt when not wildly hilarious. 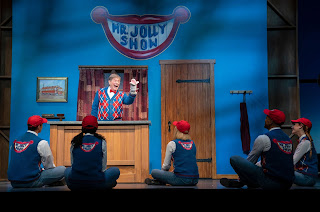 Daniel moves in with his make-up artist brother Frank (Brad Oscar)  in a rather shabby apartment. When Daniel finds out that his wife is hiring a nanny he creates the role of the Scottish nanny whom the kids eventually adore. Anyone familiar with the film knows exactly what transpires. The bookwriters have incorporated some terrific numbers especially the inventive one where as Doubtfire, Hillard tries to create chicken fricassee and turns to Siri for a recipe. What occurs is delightfully clever and extremely well staged by Lorin Latarro whose choreography is appropriately flashy and energetic. What I love about her work (as she showed in the underrated "The Visitor") is how infectious it is.

The cast is a complete joy. There are few actors, as the saying goes, that can "read the proverbial phonebook" and make me laugh like Peter Bartlett who portrays the over the hill Mr. Jolly who  hosts a children's show as if he was hosting back in the 50's. Bartlett just says "hello" and he can have me laughing uncontrollably. I had wished they had included Bartlett in the second act's flamenco scene which has McClure doing quick changes as both Hillard and Doubtfire at lightning speeds. 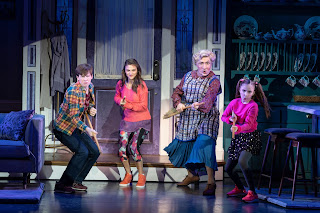 J. Harrison Ghee is a hoot as Frank's partner and costume designer who adores both Donna Summer and Jennifer Holliday. Don't dare say one disparaging word about either of them.

Charity Angel Dawson is convincing as the case worker and belts out a number in the second act. While she does a great job, the dream sequence is silly and really makes no sense at all.

The handsome Mark Evans is charmingly good as Miranda's love interest who invests in her clothing line helping to make it a success.

Who but a director with wizardry skills but Jerry Zaks could be at the reins of such a fast moving and insanely funny show incorporated with real heart and feeling. 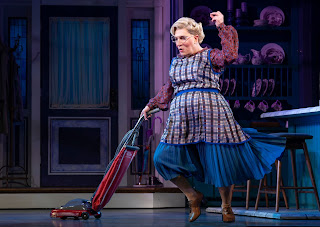 David Korins sets are appropriately on target and the wonderful Catherine Zuber again proves what a first rate costume designer she is. Philip S. Rosenberg's lighting is colorful and blends in perfectly especially with the costumes.

At the end of the show, When Mrs. Doubtfire takes over the aforementioned children's show she delivers a lovely sentiment which blends into the terrific "As Long as There is Love" that cannot but  touch you.

"Mrs. Doubtfire"a jubilant and honest in these troubled times is the perfect anecdote.

Posted by TheaterTime at 6:58 PM No comments: