As presented by the Gingold Theaterical Group and directed by David Staller at Theatre Row,  George Bernard Shaw’s Mrs. Warren’s Profession has turned into a brisk affair (and no pun attended considering the play does deal with the title character's vocation.

Shaw does have the tendency amidst all his insightful writings about feminism, male privilege and morality to be loquacious to the point of boredom. In other hands this play could be deadly dull, but with Mr. Staller at the helm and a blithesome cast it moves quite swiftly. 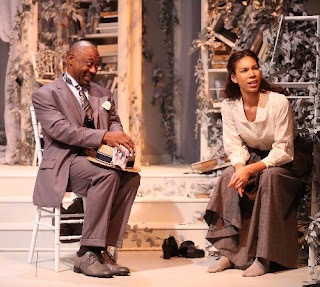 Scenic designer Brian Prather has created a bucolic garden scene in Surrey, England, with flowers adorning the various trellis’s and doorways. We first meet the mathematical whiz Vivie Warren (Nicole King.) While King is sedate in the role she is believable considering her character’s life has been devoted to studies and never really knowing her mother Kitty Warren (a delightfully exuberant Karen Ziemba.) Ms. Ziemba never fails to deliver and she is in high gear here. Vivie is expecting her mother who left her as a child to stay with others while she takes off for Europe in a profession she never reveals to her daughter in all these years. While waiting for her Vivie meets Praed (Alvin Keith) who is a good friend of Kitty’s. Dressed as a fop and effete he is love with all things of beauty and culture. He quickly reminds one of Cecil Vyse in E. M. Forster’s “A Room With a View.” Keith plays it to the hilt.

The boisterous Kitty enters with her wealthy and somewhat surly Sir George Crofts (an always excellent Robert Cuccioli) who has affections for the young Vivie. He jokingly states he could be her father. There is more to this comment that the young woman could imagine. 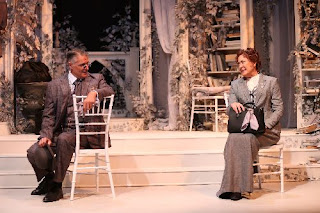 There are two other characters who balance things out. The ne’er-do-well Frank Gardner (David Lee Huynh) who spends his time gambling and tries to woo both ladies knowing they are each worth a considerable amount of money—especially Kitty. Huynh is good although he could take down his enthusiasm a bit. His scampering around is a bit overboard. His father Reverend Samuel Gardner (Raphael Nash Thompson) is the hypocrical male character that Shaw delights in creating.  The Reverend won’t enter a home of someone of dubious character yet we find out exactly how bogus his so-called puritanical behavior really is. Thompson adds humor though he could have displayed more pomposity that I would have expected from  his character. 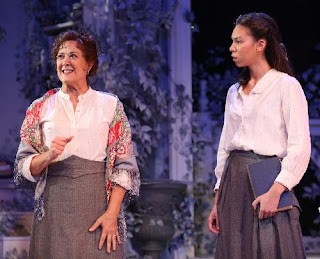 The profession in the title, of course, refers to the fact that Kitty started out as a prostitute out of necessity because there were very few opportunities in 1912 for women. She then along with her sister opened a number of brothels which prospered.  It helped having Crofts as a man helping with the investments. Things do not go well when Kitty explains all this to her daughter who has lived a sheltered life.

The costumes by Asa Benally are appropriately dapper for the men and subdued for Vivie. I would have liked to have seen Kitty's somewhat more embellished.

The messages of the objectification of women and the plight they were forced to endure comes across loud and clear along with the privileges of men in this especially fine and lucid production.

Tickets may be purchased at Theater Row 410 West 42nd Street.

Posted by TheaterTime at 4:42 PM No comments: 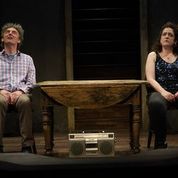 Both sadness and despair permeate throughout Kevin Barry's new play Autumn Royal at the Irish Repertory Theater. Yet, somehow, I was never as moved as I felt I should have been in a play dealing with the plight of an unhappy and trapped brother and sister caring for their father living with them who is suffering from dementia. Part of the problem is that we have seen this type of drama before and also the lack of connection between the two characters. 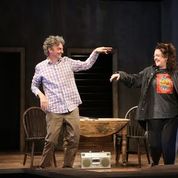 The action takes place in Cork, Ireland, in a minuscule nondescript room (the set by Charlie Corcoran features not more than a table and a glimpse of a stairway heading upstairs to where the father's bedroom is). May (Maeve Higgins) appears wearing a kind of a spangled dress top making you at first think she may have been out but more likely putting it on to make her think of being part of socializing with others.  It is no doubt that she and her brother Timothy (John Keating) rarely leave the house other than for the bare necessities.  Timothy is the far more interesting character possibly being on the spectrum. He has illusions once their dad either dies or is placed in a nursing home that he can take off surfing in Australia. He even imagines being married giving a name to his fictitious wife and daughter. May takes every opportunity in her dark and sullen disposition to burst his bubble reminding him that he nearly "surfed" in four inches of water and dislocated his elbow. Timothy has false hopes which keeps him going while the reality that May feels becomes relentlessly dire. 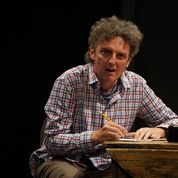 When they decided to place their father in a home they go through the phone book deciding on a facility that sounds nice thus the title of the play, Autumn Royal. Never a thought about looking into the home itself. Their goal is just to get him out so they can have a life. But throughout their life they have had nothing but misfortune. Their mother walked out on them when they were children. We really learn little about their father. And it does not help that both siblings are more concerned about what neighbors think about them putting their father away. They spend a lot of the day just looking out the window criticizing their neighbors.

There is an interesting touch with the whirring sound of a washing machine and then the washing cycle being flashed on the walls of both sides of the kitchen walls with May just motionless knowing her life is nothing more than mundane chores. Herein lies a problem with the play as directed by Ciaran O'Reilly. During the few times this takes place we should feel the agony that May is going through but she seems to be emotionless, and O'Reilly should have made this a more penetrating and meaningful scene.  It is easy to state that the character is just lost and battered from years of unhappiness, but Higgins tends to mistake darkness with blandness. The only time I found her portrayal to work is when Timothy puts on music to soothe their father from stomping around in his room and both he and may start to dance. There is a glimmer of forced happiness which is short-lived in this household 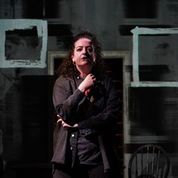 The good news is that Keating makes his character much more believable. Timothy is living in his own world and even when he tries to take a selfie of himself to put on social media you know this is not going to go anywhere. He has a faraway look in his eyes and sees not to make much eye contact with May. Perhaps, if the playwright had built more on their relationship the play could have been more absorbing.

I have always looked forward immensely to attending the plays put on by the wonderful Irish Rep and rarely, if ever, disappointed. I imagine there is a first time. Still, I eagerly await their next production.

Posted by TheaterTime at 5:00 PM No comments: 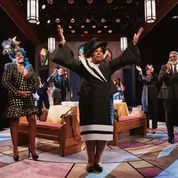 "Chicken & "Biscuits" at Circle in the Square is a delightfully funny and warm hearted show that is reminiscent of those great sitcoms of the 70's, most especially "The Jeffersons" and "Good Times." Families may bicker to the point where you think they might do bodily harm to each other, but after they have calmed down they realize the importance they are to each other.

Written with a barbed wire comic touch by Douglas Lyons, the playwright throws in a red herring from the first scene. We are in a church for a funeral service. As the very stylish and cultured Baneatta Mabry (Cleo King)  is making sure everything is in order when she receives a phone call that is a mystery to us because it is from someone she most definitely does not wish to speak to. Her husband Reverend Reginald Mabry (Norm Lewis) has taken over the church from her late reverend father whose service he is presiding over. 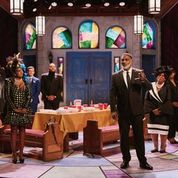 They have two grown children, Kenny (Devere Rogers) an actor who is gay and his attention desiring sister Simone (Alana Raquel Bowers.) It is evident they have never been and still are not close. To make matters worse neither she nor her mother are not that accepting of his lifestyle. And to make matters worse his partner Logan Leibowitz (Michael Urie) is white. Baneatta purposely mispronounces his name which is a running gag.  Logan being Jewish tries to fit into behaving accordingly in church whether it be white or black and ends up unintentionally causing some inappropriate behavior.

The sassy and quite vocal younger sister of Banetta, Beverly Jenkins (Ebony Marshall-Oliver) who attends in a low cut, short dress with fringes that would be more appropriate if she was going to a cocktail party or a club. Her daughter La 'Trice Franklin (Aigner Mizzelle) is the epitome of a saucy fifteen year old who has no filter.

Without getting into too much detail, sparks fly as do the hearty laughter throughout the most of the show. You know immediately the comments by the family as they stand beside the on stage casket will be causing some disruption. Simone thinks she is on stage more interested in the attention she is getting while Beverly feigns her loss with hyperbolic hysterics. 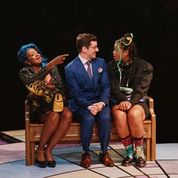 The performances are laugh out loud pitch perfect. The always wonderful Norm Lewis starts off in a quiet way as the reverend until he goes on an unending eulogy that has family members thoroughly exasperated. And taking advantage of Lewis's mighty singing voice (this is his first non musical Broadway role) he has a show stopping scene. Both Marshall-Oliver and Mizzelle vie for top spot of unrestrained comedy. A better mother daughter duo would be hard pressed to create.

Rogers is excellent as Kenny and always reliable and the entertaining Urie provides the ineptness of behavior in such a setting.

King is the perfect contrast to her sister as is Raquel Bowers to her cousin La 'Trice. 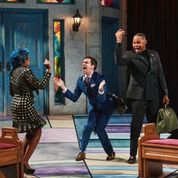 There is one other character I will not mention, but you may be able to figure out who she is as she enters near the end of the show.

Director Zhailon Levingston keeps the action moving at a very steady speed although one caveat is that the show could be trimmed by around 15 minutes or so.

Still it is just a show filled with non-stop laughter and good feelings. And is there a better time for this?

Tickets are available at the Circle in the Square Theatre 235 West 45th Street.

Posted by TheaterTime at 6:39 PM No comments: