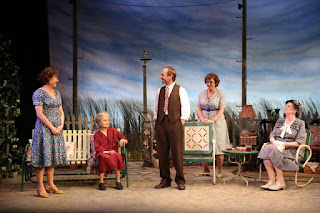 Some unwind by having a cup of camomile tea or a glass of wine. While I find both to be  helpful, what has even more of a calming affect on me is being immersed in a Horton Foote play. The late wonderful playwright who gave us among others the glowing “Trip to Bountiful” and wrote the screenplay for the classic “To Kill a Mockingbird” is having his 1955 play, “The Traveling Lady” revived at the Cherry Lane Theater for a limited engagement.

While not a perfect play and despite some unnecessarily fussy direction by Austin Pendleton , it is still Hoote’s words and situations that have a beautifully real feel to them. Quite fortunately, it is also blessed with a lovely cast who personify the characters he has created.

As in other Hoote plays, we are in a small Texas town 1950. He dos not signify it being Harrison, TX, where others have taken place but no matter. We immediately find out that a neighbor has passed away. We don’t know a lot about her except she is described by the Judge (George Morfogen) who is lounging in Clara Breedlove’s (Angelina Fiordellisi) backyard as a “funny little woman.” It seems that the late woman took in the rowdy Henry Thomas (PJ Sosko) as a young man whom she disciplined  by beating him “break his spirit.”  Henry eventually moved to Tyler, TX ,marrying  the lovely Georgette (Jean Lichty) but in a drunken stupor killed another man and spent a number of  years in the penitentiary. He never saw his young daughter Margaret Rose (Korinne Tetlow) but is getting out early thanks to Georgette and plans on meeting her where the play takes place. Upon arriving, Georgette is unaware that Henry has been released a month prior and is living in Mrs. Tillman’s (Jill Tanner) house doing handyman jobs. Tillman whose husband was an alcoholic wants to reform this young man despite his still having problems. 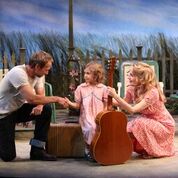 There are several other characters in this tenderly soul-searching play. Slim Murray (Larry Bull) who is Clara’s brother is still trying to recover from the death of his estranged wife Laura. We never learn as to why Laura left this fellow who seems to have sympathetic veins running through him. Nor are we sure why he refuses to attend the funeral of the recently deceased woman. We surmise he felt no affection for someone who might have added to Henry’s problems. Lynn Cohen almost steals the show as the very funny but dotty neighbor Mrs. Mavis who is always trying to get away from the daughter Sitter Mavis (Karen Ziemba) she lives with. I was surprised that Hallie Foote the playwright’s daughter and great interpreter of his work was not in this play for she would have fit the role of Sitter perfectly. But, thankfully, the always reliable Ziemba does  not fail to disappoint as a woman who feels that life has passed her by. Just watch the wistful gaze that Ziemba has down pat as Sitter. Sosko is excellent as the broken Henry who gets into another bad situation at the play’s end. While he is not responsible for what has occurred, as someone who always found himself in the thicket of problems and being drunk again, he offers not objections when arrested. 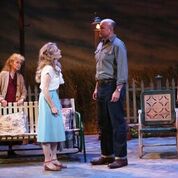 There is never a tempest of greed in most of Hoote’s illuminating works with the exception of his exceptionally fine “Dividing the Estate.”  His plays as this one deals with finding the correct path to walk down and if you take the wrong detour hoping to find the right people to help you back on the way to redemption. In Hoote’s optimistic way of thinking we all have purpose even when life feels devoid of meaning.

There is a very touching line that Sitter speaks near the end of the play to the effect that “my whole life would have been different if I’d just learned to dance.” While it takes more than that to change your life sometimes it is the small steps that help guide you.

Tickets are available at the Cherry Lane Theater 38 Commerce Street or by calling 212.352.3101.As of this date the limited engagement ends July 16.

Posted by TheaterTime at 4:36 PM No comments: 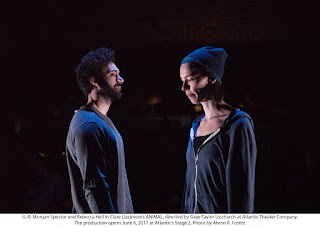 No one can play a woman on the verge better than the brilliant actress Rebecca Hall whose performance of a woman convicted and executed for the murder of her husband in the recent “Machinal” was astonishing. In Clare Lizzimore’s fascinating but ultimately disappointing new play “Animal” at the Atlantic Theater Company she again proves how galvanising she someone going though the depths of emotional turmoil.

Rachel (Hall)  dressed in gray sweats, a hoodie and a woolen cap which she only removes near the end of the play is meeting with her psychiatrist (Greg Keller. ) Her diagnosis is not revealed until the play’s too tidy and unsatisfying  conclusion ,although we find out that she was unable to work and wants the doctor to allow her to do so. He informs her she can return to employment whenever she feels like it and she seems to  have ambivalent feelings about his suggestion. She is not the ideal patient arguing with him and seeming to put up constant barriers. 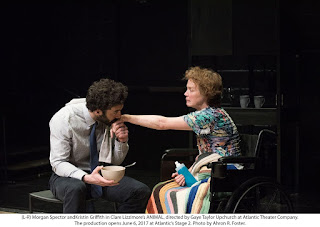 The scenes in her home become the most enigmatic which eventually get explained. She lives with her caring husband Tom (a very fine Morgan Spector) who seems to be at his wits end with her centrifugal force of behavioral changes. She can be sweet as is shown in some flashback (at least, one assumes they are) scenes with him and then become belligerent. Living with them is the Old Woman (a wonderful Kirstin Griffith) whom Tom calls his mother. She is in a wheelchair and only mumbles. While Tom is very caring to the woman and expects Rachel to be the same, when he is at work she is anything but. While not physically abusive she succumbs in an almost menacing way to the woman’s taunts by giving her cold soup and getting furious when she spills it all over herself. What are we to make of Rachel? The callousness is disturbing and at the same time she seems unable to control her behavior almost taking pleasure in being at odds with everyone. Her anger towards her husband also is unfounded although things are explained at the conclusion. 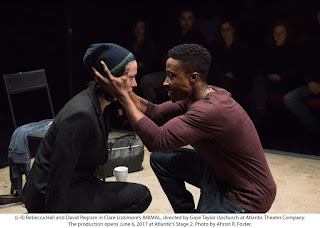 A hunky young man Dan, (David Pegram) breaks into their apartment and instead of robbing her wants to kiss her and tries to coax her in his sexy manner to do more. She is taken by him and he seems to have a relaxing affect upon her in a way that she can escape the web of confusion she is in. Hall is such  an amazing actress that you never take your eyes off her as she almost begins to break through the margins that she feels surround her being. Of course, at the same time you are wondering why isn’t she calling for her husband who is in the other room.

More of a conundrum is why when she visits the doctor another time he is played by a little girl (Fina Strazza). The dialogue between them never seems to add anything to the play and despite Gaye Taylor Unchurch’s capable direction that particular scene seems more foolish than meaningful.

The conclusion comes a bit too swiftly and tidy and for reasons I cannot get into not entirely believable.

Still, we are blessed with seeing an actress on a nearly bare stage whose every word you will hang onto. You travel with her on this journey as she pulls you into her edgy world.

Tickets are available at the Atlantic Theater Company/Stage 2 330 West 16th Street or by calling 866.811.4111. As of this date the limited engagement ends July 2.

Posted by TheaterTime at 8:30 AM No comments: