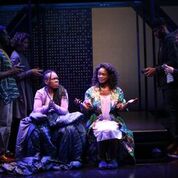 Grief is one of the healing processes in the loss of a loved one. In Ngozi Anyanwu’s well intentioned but detached “Good Grief” at the Vineyard Theatre her goal appears to be obtaining the good vs. negative grief in dealing with such tragedy.  Yet, there were too many scenes that feel almost like fillers (what was with that bizarre wrestling scene at the beginning of the show!) which add nothing to the play which is written in a non-linear style. 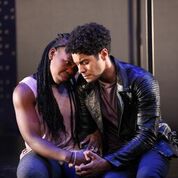 The play stars Anyanwu as Nkechi whose parents come from Nigeria and they all  reside in Bucks County, PA. Her childhood friend MJ (Ian Quinlan) has died tragically in a car accident. In flashbacks we see both of them as children having fun playing video games--a scene that is very realistically played out. Later they are in bed but nothing much occurs sexually between them. Just basically teens unsure of themselves experimenting. For some reason that is not completely clear as to why she takes a leave from medical school much to her parents displeasure. It is hard to get a grip on MJ’s character. He seems to like her but there is a distant feel to his character which does not help involvement in the show. You get the feeling you are being told a story more so than actually feeling what is actually  happening on the stage. I am not quite sure if director Awoye Timpo’s could do much to have added any real warmth to the scenes that leave you strangely aloof. 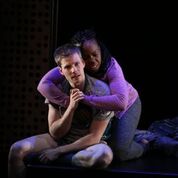 There is also a brief relationship with JD (Hunter Parrish) which adds little to the storyline as does bringing in her brother (Nnamdi Asomugha) whose encounters with Nkechi go nowhere.

The playwright has in all likelihood unknowingly written her parents in the show (Patrice Johnson Cheyennes and Oberon K. A. Adjepong)  to be while not uncaring rather standoffish. This is especially evident  for when you hear her sobs (not really effective because they appear to be  pre-recorded)  they are more concerned with “spooning” while being in bed. They quite surprisingly show no interest in their daughter’s sorrow.

There is promise in Anyanwu’s writing but here the show sheds no real life on the grieving process and the entire play lacks focus on characters or situations. Sadly, it is not developed as it should be.

Posted by TheaterTime at 4:52 AM No comments: 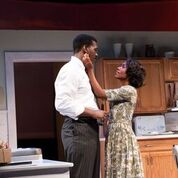 Fireflies--One of the Best Plays of the Current Season

Donja R. Love’s first play in his trilogy, “Sugar in Our Wounds, ” told a moving and carefully optimistic tale about a slave on a plantation reading about possible freedom and his love for another male slave. His second “Fireflies” is a heart wrenching two character work at the Atlantic Theater Company. Magnificently acted and delicately directed by Saheem Ali, there are scenes almost too painful to bear and others that have such a rare and tender beauty you are consumed in every part of it Easily, one of the best new plays of the current season.

Taking place in the segregated south in the difficult times of 1963 Olivia (DeWanda Wise) and her civil rights activist husband Charles (Khris Davis) appear to be very much in love. They dabble in small talk with sexual innuendos that have both smiling. Yet, there is an undercurrent of instability in their marriage and especially emotional issues with Olivia. Both she and Charles are devastated by the recent Baptist church bombing in which four young girls are killed. She cannot seem to get out of her mind what the explosion must have been like and throughout the play you hear the bombing and the lighting up of the sky (excellent sound design by Justin Ellington and projections by Alex Basco Koch). Her husband who is always traveling helping out causes has to give the sermon at the funeral for these young girls and naturally finds it an impossible feat. 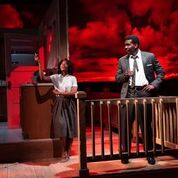 Slowly, things start to unravel. Charles is unsure how to deal with his wife and her problems are compounded by what she perceives to be his infidelities. She has a clever way to discover if indeed he is seeing other women on his travels. What makes her situation even more difficult is coming to grips with her own sexuality while deciding whether to keep the child she is pregnant with. There is a beautiful scene which I will not divulge that has to do with letters that is incredibly poignant in such a delicate way.

What makes this show, which thankfully does have a hopeful ending,  even more distressing is that we are at a time when there was little help for those suffering emotionally. And for a black couple living in the south it is further compounded. Where especially did an African-American woman go to discuss her issues without being believed or shamed. 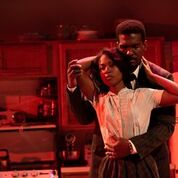 The performances are glowingly alive. Davis who was superb in “The Royale” is equally wonderful here  both caring and bombastic unsure how to deal with his wife while wrestling with his own issues. There is no doubt he loves her but just comforting her when she hears those ominous bombs is  not enough. Wise is stunning as she portrays a nerve jangling Olivia whose only way of coping is reading the letters from a friend which give her the sustenance she needs to face life. Her portrayal is simply mesmerising holding on while sorrow pervades every very being.

Ali directs tis emotionally potent work by Love with great deft and feeling. You come away exhausted but know that Olivia is going to somehow make it. Or, at least, you certainly hope so.

Tickets are available at the Atlantic Theater Company/Linda Gross Theater 336 West 20th Street or by calling 866.811.4111.

PHOTOS: JOAN MARCUS
Posted by TheaterTime at 4:39 AM No comments: