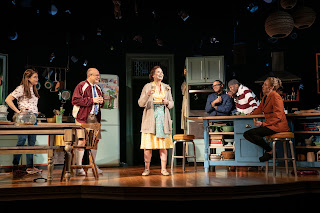 The first thing you might notice other than the crowded looking kitchen set at the beautifully written, deeply affecting and wonderfully acted new play "Birthday Candles" by Noah Haidle at the American Airlines Theater is what is hanging above the set. What do items like a guitar, umbrella, rocking chair and a multitude of other things all mean? You will see them in a different "light" by the end of this show.

Debra Messing from "Will and Grace" fame showed how excellent her stage attributes are in the very fine "Outside Mullingar" from a number of seasons ago. Here again she has a very special and believable stage presence as Ernestine who ages (no make up so all depends on her physicality and voice patterns) from age seventeen to near one hundred. This appears to be the case for all the other actors. 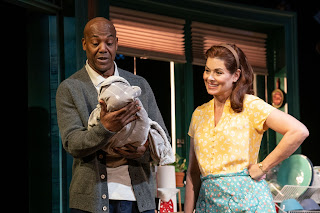 There is something very sweet from the start as her mother, Alice (Susannah Flood), bakes a cake for her seventeenth birthday which plays an important part in the play as they years go by. Flood and two other characters play multiple roles. There is also a lovely touch (so much of the play will bring back memories of your own childhood) where every year her mother measures how much her daughter has grown and marks it on the doorway arch. She is pursued by the very humorous Kenneth (a humorously  likable Enrico Colantoni) who is in love with her. But she falls for the more self assured Matt (a superb John Earl Jelks).

The play is marked throughout by the sound of a "ding" so you know exactly how many years have transpired. Under Vivienne Benesch's astute direction characters leave and then re-enter the stage now older and some being Ernestine and Matt's offspring. 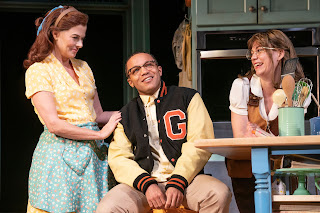 The play reflects the life cycle in so many ways. When first introduced to Ernestine she is whimsical speaking about wanting to travel the world and the ups and downs of what marriage brings. Things first work out well for her and happiness is in the forefront of her eventual marriage to Matt raising two very different children. The generally easy going Billy (an excellent Christopher Livingston) has shouting matches with his father while his sister Madeline (Flood) has very serious emotional issues that progress. There is one very funny line in which Billy addresses his father that is used later by his own daughter as an insult to him. Like life, marriages that seem wonderful can easily fall apart. Billy and his wife Joan (an extremely funny Crystal Finn) seem to be quite compatible until they are not.

It is about halfway through the 95 or so minutes that things get very serious and emotionally moving. I won't give things away but like in any life things can turn very upsetting. As I mentioned earlier it  is remarkable at how well the actors without any visible makeup age in the way they not only speak but walk, act and speak. One scene I won't easily forget involves an incredible turn by Jelks who becomes ill. Just take notice how he is fine one second and then suddenly the illness takes over his body. Another involves Billy, now a grandfather, who develops his own illness. 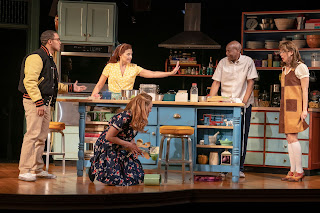 The play is so razor sharp in depiction of families and life situations. Even though the years move so swiftly nothing in the play feels rushed. Messing giving a sensitive, low keyed performance trying to keep the peace in her family is just as sterling as all the other cast members.

This Roundabout Theatre Company production is one of the finest plays I have seen this season.

Posted by TheaterTime at 5:04 PM No comments: