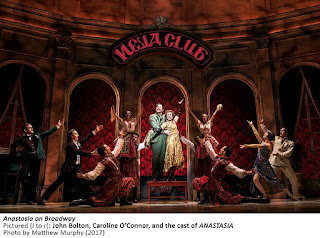 If you are looking for a family musical you can do no wrong than with the overwhelmingly entertaining and exquisite to view “Anastasia” at the Broadhurst.

Based on the hugely successful film the show opens with the revolution overthrowing and murdering the last of the Russian Czars with the exception  for the teenage Grand Duchess Anastasia (a sparkling Christy Altomare) and her grandmother the Dowager Empress (a regal Mary Beth Peil). Anastasia suffers from amnesia  and she becomes a street sweeper meeting up with two con men (Derek Klena and John Bolton) who are trying to pass off a young woman as the Tsarina to her grandmother now living in Paris for a large amount of money.  When they set their eyes on Anya who speaks French (the regal Russians we are told only spoke French) they feel they have a perfect match only to begin to think that she may indeed be the real thing. The three hitch onto a train (a truly fun filled scene)  with the anarchist Gleb (excellently played and sung by Ramin Karimloo) pursuing her unsure if he can fulfill his duty of killing off the last of the Romanov’s. You know right from the start that being family entertainment all is going to work out well for them as they arrive safely in Paris.  And  no spoiler alert that  she meets her grandmother who believes she is an imposter until she witnesses something that her granddaughter possess. 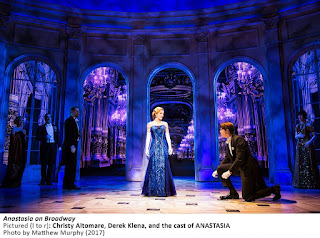 Altomare makes a radiant Anastasia and her rendition of the most familiar song from the film “Journey to the Past” is sung beautifully.

Klena whom you know she will eventually fall in love with is dashing and Bolton (“A Christmas Story”) never fails to delight with his lovable antics. For some additional comic relief Caroline O’Connor makes for a daffy vaudevillian like performer as Countess Lily.

While Stephen Flaherty and Lynn Ahrens score may not  come close to their true masterpiece “Ragtime” it nevertheless is very pleasant and meets the criteria for the show. True that two numbers are reminiscent of “I Remember it Well” and “The Rain in Spain” but they blend in just fine.

Linda Cho’s costumes are especially elegant and, perhaps, the biggest treat is the gorgeously stunning projections by Aaron Rhyne and equally good stets by Alexander Dodge resulting in “oohs” and “ahs” from the largely young audience.

Again director Darko Tresnjak (“A Gentleman’s Guide to Love & Murder”) proves what a marvel he is at seducing the audience (both adults and children) throughout his shows with his ingenuity and Terrence McNally’s book may have some syrupy moments here and there it remains faithful enough to the film.

If you are looking for a more serious musical based on the young woman I would you suggest to listen to the stirringly dramatic score to the short lived “Anya.” However, for a show that will enchant not only the girls in the audience but even some the boys (I overhead one young man asking his friend if he was crying) “Anastasia” is among the best musicals of the season.

PHOTOS: MATTHEW MURPHY
Tickets for “Anastasia” are available at the Broadhurst Theater 235 West 44th Street or by calling 212.239.6200.

Posted by TheaterTime at 1:08 PM No comments: 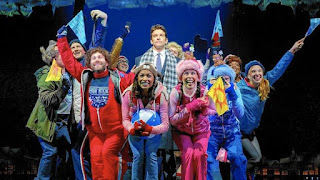 Groundhog Day--Day In And Day In Again

While the film “Groundhog Day” still remains a cult classic you can count me among those who never saw what was so enticing about it, despite an enjoyably deadpanned Bill  Murray as an arrogant weatherman. Yet, the musical at the August Wilson Theater is a complete joy thanks mostly to the incomparable Andy Karl who recently gave a superb performance in the short lived musical “Rocky.” A few days before opening night Karl tore his ACL but was determined to open the show. I attended that performance and was amazed at his dexterity, for his character Phil Connors never stops moving. Forget the Energizer Bunny for Karl makes him look like a tortoise. But there is more to the role than just movement.

Connors is a supercilious weatherman who has to reluctantly go to Punxsutaweny, Pa, once a year to report on weather the groundhog has seen his shadow. His middle name could be conceit for he feels nothing but scorn for the chummy residents and for covering what he considers to be a continually dumb assignment. What happens is that throughout the show he is stuck in time for each morning he finds himself waking up in his hotel room and going through all the motions of meeting the townspeople and reporting on the weather.,  The townspeople are a bit of a wacky but loving group of people along with Connors’ producer (Barrett Doss) whom you know will eventually become his love interest. I wish that Rebecca Faulkenberry who plays Nancy, Connors’ one night stand, would have had more to do. She has a lovely number “Playing Nancy” which opens the second act. As time passes Connors comes to realize how much he himself as missed in life and finds solace in the peacefulness of a small town with the person he loves.

Danny Rubin’s book and along with Tim Minchin’s lyrics are filled with sardonic wit (could have done without the song about having an enema)  although I found the music catchier  in Minchin’s score to “Matilda.” 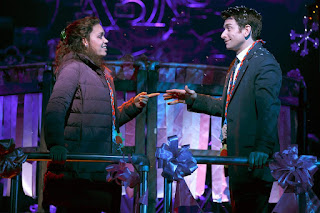 Matthew Warchus (“Matilda”) runs the show on high octane and it will be hard to forget the  inimitable miniature car chase.

Thanks also to the inventive (love those upside down miniature houses running atop the proscenium) set design by Rob Howell (“Matilda.”)

The show as fun filled as it is still would not work half as well without Karl who while bringing a cynicism to the role still makes Connors likable. And his ultimate transformation which takes place over a series of repeated scenes but all slightly different is believable in a surprisingly tender manner. Hey, he deserves an award for getting out of bed and changing into clothes a multitude of times wearing that heavy knee brace. 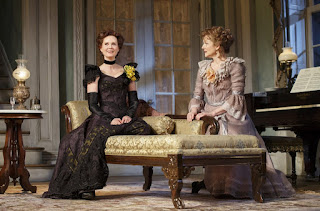 The conniving Regina and her two equally  manipulative brothers Oscar (Darren Goldstein) and Ben (Michael McKean) need to raise money to build a cotton mill in their town despite the fact it will destroy the town in various ways. Things don’t go quite well since Regina’s husband Horace (a tremendously good Richard Thomas) who is recuperating out of state returns and decides not to support this deal much to the anger and ultimate retribution of Regina. Not only is he concerned with the welfare of the townspeople but wants to undermine his deceitful and uncaring wife whom he realized long ago only  married him only for his money. 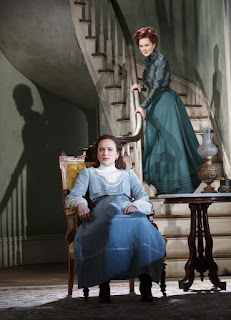 Nixon plays the title role a bit more untraditional in that from her first scene you are really not quite sure how devious she is. She is more coquettish with a plastered on smile and appears to be meeker than Regina really is, and it works beautifully. So, when she proves her treacherous self it comes more of a surprise. However, she does play Birdie more traditionally as a fragile, almost doltish woman whose husband married her only for her family’s money and she is wonderfully touching.

In Linney, you can almost see that double dealing quality from the onset. She plays the role more self assured and equally foxy. Yet, her Birdie is not as crushable as the way Nixon plays it. She appears to be more of an abused wife with a drinking problem.

Both actresses are quite brilliant and not matter whom you see you will not be disappointed. 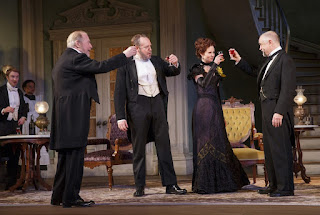 Thomas equally gives a superlative performance as the likable and quite ill Horace who is loved only by his devoted daughter Alexandra (Francesca Carpanini). The pivotal scene where he is struggling while walking up the staircase is done to perfection.

Director Daniel Sullivan is the expert in directing family dramas and by no means has let us down with this one that calls out for his ability.

There is not one false move or miscalculations in this revival which is one of the highlights of the season.

Tickets for “The Little Foxes” are available at The Samuel J. Friedman Theater 261 West 47th Street or calling 212.239.6200. The limited engagement ends June 4.
Posted by TheaterTime at 12:55 PM No comments: