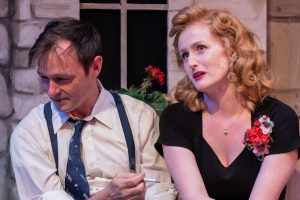 The Mint Theater Company, as I have written before, is always a joy to attend because they present both American and foreign plays that are basically unknown.  Generally going back to the  early 20th century most are quite good although there are a few clinkers here and there. In some cases you find yourself marveling at just how ahead of their times they were. Unfortunately, their current production "The Mountains Look Different" at Theater Row under the direction of Aidan Redmond falls rather flat. Written by Irish playwright Micheal mac Liammoir the show played at Dublin's Gate Theater which the playwright founded with his partner back in 1948. The program which tells about the gay and "flamboyant"  writer is infinitely more fascinating than the play itself. 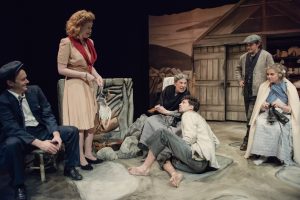 I can imagine  "Mountains" must have caused quite a stir when it first opened due to the subject matter about a prostitute marrying a well respected man. The playwright was intrigued with Eugene O'Neill's "Anna Christie" after she herself married a respectable man. What exactly happened to her? So, this is a kind of very loose variation on that occurrence.

A stylish looking Bairbre (Brenda Meaney) arrives from spending 13 years in London working at a hotel (and not as a desk clerk) in the Irish countryside with her husband Tom (Jesse Pennington) to live on the farm with her gruff father-in-law Martin (Con Horgan.)  Bairbre does not look like she fits in at all with her snazzy pocketbook and matching rose on her expensive looking black dress. Exactly how she and Tom met is never really delved into and they look like the most ill matched couple. He does not seem aware of her past profession other than her running the hotel. While married a few months for some inexplicable reason their marriage has not been consummated.

Martin takes and instant dislike to her and not just because he was not involved in the matchmaking process prevalent during that time period but because when in London he actually used her services which she does not recall. You know immediately where this is going to go. There is a long and somewhat tedious conversation between both Martin and Bairbre in the second act which makes what will precipitate even more obvious. I never thought of Irish dramas as melodramas, yet this one definitely is. 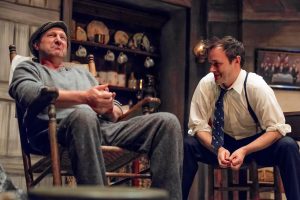 There are a number of other characters who are neighbors and all very good and ft  in well with the the time period. There is one lovely scene where a young local girl Bridin (McKenna Quigley Harrington) brings Bairbre some strawberries as a welcoming gift.

The performances are all good although there was something too quirky about Pennington. He seemed to speak through clenched lips and had some uneasy movements which he appears to have  adopted for this character. I am not sure why he decided to develop these mannerisms which made no particular sense. Was he expressing a kind of nervous uncertainty in his marriage to her? It became rather distracting and his heavy brogue did not help matters.

Vicki R. Davis is responsible for the quaint revolving set which has a very authentic quality to it.

The play just seemed to be a minor one compared to to other Mint shows under the producing artistic director Jonathan Bank.


Posted by TheaterTime at 5:59 PM No comments: