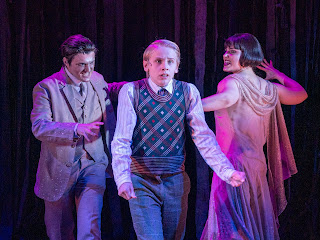 An oddly entertaining, gothic style new musical has just opened at 59East59 Theaters called "Whisper House"  and if you let yourself be seduced by it you will find it bewitching. What should grab you most especially is the deliciously atmospheric score by Duncan Sheik ("Spring Awakening") who is responsible for the music and joined by Kyle Jarrow ("SpongeBob SquarePants The Musical") writing both wrote the book and lyrics. While the book is fascinating  it is the very enticing score that lingers in your mind.

Not many shows begin with two ghosts singing the opening number and who rarely leave the stage singing as roaming balladeers.  Mostly ghosts portrayed are not evil but these two (Alex Boniello and Molly Hager) are seeking revenge for something you will discover later in the musical. The opening number is called "Better to be Dead" referring to each of the characters and you know you are in for something very different. While the premise is simple, director Steve Cosson keeps you guessing exactly what is the relationship between the ghosts and the humans and what are the secrets that are being kept. And the show segues thoughtfully into racism and how jumping to conclusions leads to dire consequences. 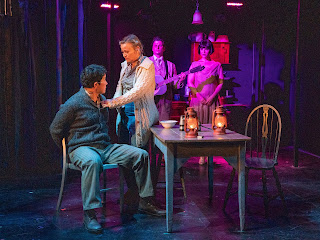 The time period is 1942 and  12 year old Christopher (Wyatt Cirbus)  whose father was killed during the attack on Pearl Harbor results in his mother being admitted to a mental facility for attempting suicide. Christopher's only family member is his Aunt Lily (Samantha Mathis) who was the sister of his dad and someone he has never met. Lily is a bit of a curmudgeon who never married and is living and running a lighthouse in Maine. She most certainly does not prefer having to care for a young boy.  Living in the bell tower is Yasuhiro (James Yaegashi) who emigrated to the United States long before war broke out. There is a kind and loving relationship between both of the adults. Yashuiro sings a lovely ballad about how difficult it was to make the transition to his new country in "The Art of Being Unseen." He sings about the memories in Japan and his devotion for Lily but cannot forget the reason he left his native born land.

Complications come into play even though Lily and Christopher begin to forge a more understanding relationship when the sheriff (Jeb Brown) tells a story about a young boy turning in a German neighbor who might be a spy. The Sheriff sings the eerie "The Ballad of Solomon Snell" which will explain about the ghosts and indicates something concerning Lily that she explains to her nephew near the end of the show. 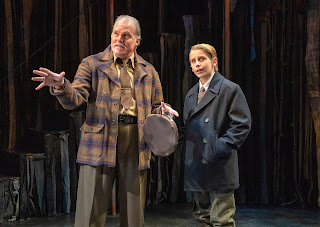 If not for xenophobia which ran rampant during this time period, things would not have taken a more serious and unpleasant turn for one of the characters affecting the others.

The two ghosts are wonderfully played with an ethereal Hager and a very handsome Boniello who both harmonize together perfectly and move on and off the stage as if they are floating. They never seem to change their personalities which could have added a bit more to their characters, but they have this magnetic grace about them that you really find alluring in a daunting manner.

Mathis makes her character much more likable as the musical  proceeds and a standout is Yaegashi as the kind and sympathetic character Yasuhiro. 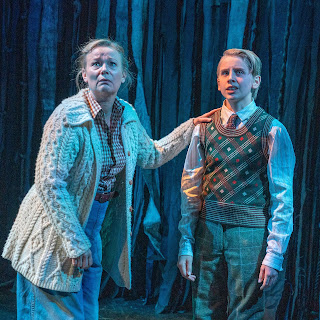 Brown does very well as the sheriff who becomes more understanding. While Cirbus is good I just wished he was a bit more animated. He has part of a song near the end and it would have added more to his character if the composers wrote a ballad for him somewhere earlier.

The minimum but effective choreography is by Billy Bustamante and Alexander Dodge has created an inventive set design.

Don't be put off by the coming and goings of the ghosts which may appear silly during the first 20 or so minutes because everything blends together very well.

I found the show to be one of the most original of the season thus far.

Posted by TheaterTime at 5:01 PM No comments: 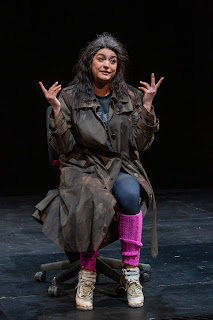 Jane Wagner's 1985 hit play "The Search For Signs of Intelligent Life in the Universe" boasted an incredibly brilliant solo performance by Lily Tomlin portraying about twelve characters. The word portray does not accurately describe her ability to almost literally morph into each of them-- both male and female. The play itself while entertainingly clever could be a bit bewildering.  Yet, Tomlin clearly delineated each of the characters so you understood where Wagner was going. 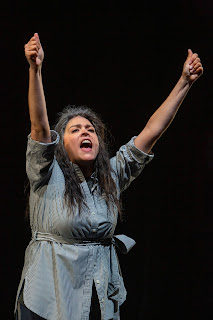 With Cecily Strong now taking over Tomlin's role in a new revival at the beautiful Griffin Theater at The Shed, the show as not necessarily worn well with time. Wagner's tale of the interconnection and observations between men and women along with feminism and the arts seems frequently outdated. When Trudy the self proclaimed "crazy" homeless woman whom we are first introduced to and acts as a kind of narrator states, "I refuse to be intimated by reality anymore" it does not seem to have the effectiveness it once did. And when one character states that he reads The World Street Journal on acid it evokes a chuckle if not more. The alluding to Andy Warhol several times with art vs. soup falls flat.

In order for this show to work with the multitude of characters you need an actor who can not only infiltrate but define that person. Strong is good but she never gets into the core of any of them even though she starts well with the first,  Trudy,  who is waiting for her alien friends to arrive. Appearing on Saturday Night Live for the past 10 years she can appear amusing and tender in her portrayals on stage, but she needs to do more. She should try to change her voice intonation more than she does and get into the various characters' psyche which which she rarely does.

She does a fine job of portraying the rambunctious teen Agnes who wants to be a performance artist and  whose parents lock her out of the house. 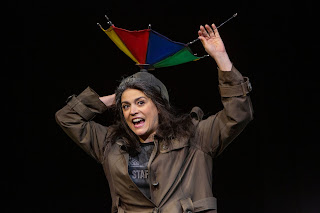 While Chrissy is the young woman unable to hold any job Strong does not seem to have a grip on her role to make her more pertinent.

Strong does better with the snobby socialite Kate who can't stand her hairdresser whom she amusingly calls Bucci The Arrogant  Her line about seeing an "uplifting" show had her "dozing off" probably  still resonates with theatergoers feeling obligated to like shows just because they may have gotten rave reviews.

I had wished she portrayed the somewhat obnoxious Paul with greater fortitude creating more laughter about his attitude towards sex. I loved the line about his sex urge being "industrial strength" but minus any desire. 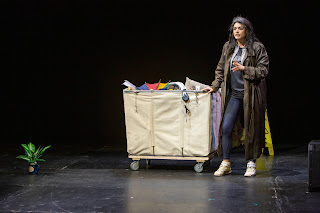 Strong does much better as the compassionate and lovable sex workers Brandy and Tina.

As Lyn, Edie and Marge there is a discussion of  the feminist movement which is more of a retrospective. While this is fine and certainly still pertinent, it needed to be updated to bring a fresher feel.  And Strong lacks the punch to make it as effective as it should be so basically it feels like a history lesson.

Director Leigh Silverman could have had Strong show more vigor in creating the characters and there was no need for several props and an unnecessary colorful belts one of the characters wears later in the play. One other issue that works to the detriment of the show is the fact what was once a two and half hour or so play is now one hour forty five minutes. Not sure if this was Silverman's or Wagner's decision but not a good one. It takes a while to understand each character and the shortening of the play makes them more superficial than they should be.

While I still admire Wagner's work, with few updates it is less than dazzling and unless you have a highly animated and deeply believable characterization of every person the playwright has created you may find your interest sagging.  Sadly, that was how I felt.

Tickets are available at the Griffin Theater at The Shed 545 West 30th Street (between 10th and 11th Avenues.)

Posted by TheaterTime at 5:24 PM No comments: