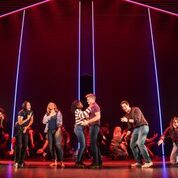 The opening scene of the powerfully alive and thrilling new musical "Jagged Little Pill" based on the concept album by Alanis Morissette and Glen Ballard at the Broadhurst Theater has the Healy family posing for their annual Christmas letter. They are smiling but you know immediately that something is just not right. Those antlers on the mother's head, Mary Jane (a superb Elizabeth Stanley), look perfectly set but nothing can camouflage that there is an undercurrent of sadness. The workaholic father Steve (an equally excellent Sean Allan Krill) is addicted to porn according to Mary Jane which seems to take the place of having sex with his wife.


We soon learn that Mary Jane is addicted to opioids and is in a constant state of nervousness. There is one brilliantly staged scene thanks to the always inventive director Diana Paulus in which Mary Jane is squirming on the sofa and one of the young ensemble players is her inner self slithering around unable to get herself together. Another equally potent scene during the incisively ironic "Smiling" has some cast members walking past her and then suddenly as the pills take full effect walking backwards a metaphor for her own being. The inner turmoil going on in Mary Jane's mind and body is perfectly depicted in these two scenes.  Paulus who never received the recognition she deserved for the wonderful musical "Finding Neverland" which had a much too short lived life knows how to construct shows and have them relate to the storyline. 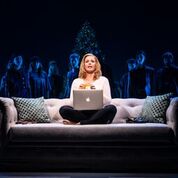 The other two family members equally have their own angst. Nick (a fine Derek Klena) is the "golden boy" who can seem to do no wrong despite the fact he is tired of trying so hard to be that perfect son his mother seems to demand. He even has gained early admittance to Harvard. Things are going fine until he attends the wrong party and is caught up in something he learns to regret. Frankie (played to perfection by Celia Rose Gooding) is their adopted black daughter who has enough to contend with. The family dynamics and her own sexuality. She states she is bisexual while having a relationship with Jo (Lauren Patten) while falling in love with Phoenix (Antonio Cipriano.) Patten has a show stopping number in the second act where she is falling to pieces knowing that Frankie has left her. I cannot even begin to convey the emotional roller coaster she goes through in this number. Trying to contain her emotions and then falling apart again and again. It is a bitter, sad and yet loving song which is filled with remorse and despair. Another compelling  performance is that of Kathryn Gallagher who portrays Bella a victim of date-rape whose “No” which  is incredibly effective. 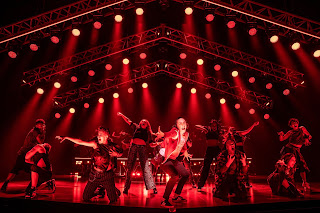 Diablo Cody's ("Juno") book is razor-sharp throughout. It is not easy tackling so many of the problems these young people are going through and make them feel fresh and she does completely.

The inventiveness of movement director and choreographer Sidi Larbi Cherkaoui is ceaseless and the very capable ensemble accomplishes these moves with deepest emotion. 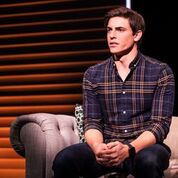 Again, praise must go to Paulus who makes sure that the show which runs about 2 hours 45 minutes never lags. The staging feels so real that you come to understand the sorrow and despair that the characters are going through. 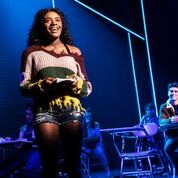 If there is one problem it is the fact that a good many of the  lyrics which are so tantamount to what is occurring in each character's life are indecipherable. It is unfortunate that the music overpowers the strong words being sung. Except for this caveat it is a show blessed with a team that makes sure all else works to perfection.

Tickets are available at the Broadhurst Theater 235 West 44th Street.


Posted by TheaterTime at 8:01 PM No comments: 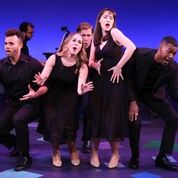 Anything Can Happen in the Theater: The Musical World of Maury Yeston: A Most Fitting Tribute

Maury Yeston is a treasure as a composer. His music is melodious and his lyrics are wonderfully clever and pertinent to whatever show he is writing for. They weave in so beautifully with the storyline. Take his scintillating score for the sumptuous "Nine" and his equally sparkling one for the dark "Grand Hotel."

A retrospect of his work is being presented in the delightful revue "Anything Can Happen in the Theater: The Musical World of Maury Yeston" by The York Theater Company at St. Peter's. There might be two mishaps along the way, but for the most part it is a very loving tribute. The young cast of five Benjamin Eakeley, Jovan E'Sean, Alex Getlin, Justin Keyes and Mamie Parris give their all to each of the numbers and do well in conveying the emotional range of each of their respective numbers. The show is conceived and directed by that whiz of the "Forbidden Broadway" series Gerard Alessandrini.


Some of the songs will be quite familiar to theater buffs of Yeston's shows. Eakely tackles the deeply emotional and difficult song to sing "Love Can't Happen" from "Grand Hotel." He gives it his all and pulls it off admirably.  He also charms with the more lighthearted number from "Nine "Only With You." 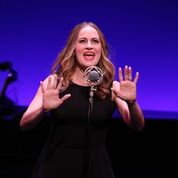 While Mamie Parris does a magnificent rendition of "Unusual Way" also from “Nine" making it feel very fresh (and I must say I have heard many renditions of this song) she is, unfortunately, caught in two less than successful numbers. "A Call From the Vatican" falls flat despite all she puts into it. One can simply not forget the original production with Anita Morris singing it in her indomitable sexy manner with that unforgettable body suit nor in the revival in which  Jane Krawkowski being lowered onto the stage upside down. So, unless Alessandrini devised it in a more creative way it becomes mundane. Also, the not very good "Cinema Italiano" which was in the lacklustre film version of "Nine" featuring both E'Sean and Keyes as back up dancers With Parris singing  goes nowhere as choreographed by Gerry McIntyre. McIntyre's choreography is much better in the  rousing "The Mardi Gras Ball" from "The Queen of Basin Street." 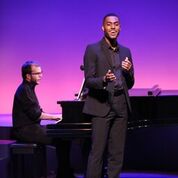 E'Sean sings the wistful "I Had a Dream About You" beautifully with just the right amount of melancholy. Hard to make me forget Betty Buckley version, but he comes mighty close. He also casts a graceful spell on "Mississippi Moon" a song I have never heard before. 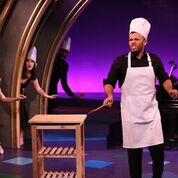 Justin Keyes displays a keen sense of slightly wicked humor in his "Salt n' Pepper" also an unfamiliar number to me. Filled with double entendres he makes the most of it. His duo with E'Sean "You're There Too" from the lesser known "In the Beginning"  is sweetly staged.'' 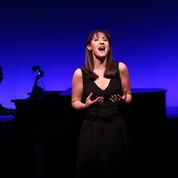 Alex Getlin has a gorgeous voice and sings one of my favorite Yeston compositions "Danglin" about the end of a  love affair. You can feel the heartbreak in every word as Getlin stands perfectly still drawing every emotion from it.  She does equally well on the haunting "Strange" which I have heard for the first time.

The show has a fitting ending with two beautiful numbers from his Tony Award winning musical "Titanic."

For a nice respite from some blockbuster musicals currently on the scene give this small but big hearted show a try.


Posted by TheaterTime at 8:00 PM No comments: