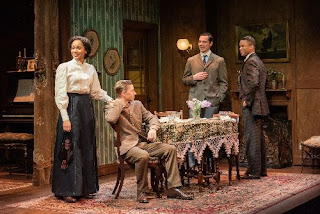 One of the most enjoyable things about attending Mint Theater Company productions is how far ahead of the times the shows they present truly were. And even more so how applicable they are today. While not earth shattering in their themes by today's standards, I can only imagine how shocking they surely were back in the early 1900's when many were produced.

Currently at Theater Row their latest production is British playwright Elizabeth Baker's "Chains" which is a bittersweet tale of breaking free from your everyday constraints to seek new horizons. This especially applies to those encumbered by jobs that have become "chains" around their neck. Charley Wilson (Jeremy Beck) and his wife Lily (Laakan McHardy) rent out a room in their house in Hammersmith to a lodger,  Fred Tennant (Peterson Townsend.) When Charley hears of Tennant's imminent departure to Australia to work as a cattle rancher, he becomes peevish which sets the tone for his behavior throughout the play. His wife will miss the congenial Fred but admires his decision. Not so Charley. He dislikes his job as a clerk knowing that his work options won't go beyond head clerk. He loves gardening and farming and would love to partake in such a move but there is no way that Lily is agreeable to this. Even though Charley said he will send for her when he gets established in Australia, Lily is against this move. You can hardly blame her. She is content but not Charley. And to make matters worse when his co-worker Thomas Fenwick (Christopher Gerson) comes to tell him that they are reducing all wages so Charley must accept the lesser amount or leave,  it makes him more determined to set course on this adventure. 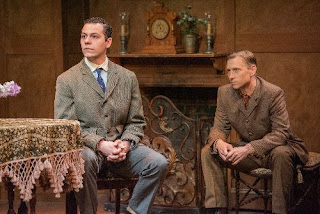 There are a number of other characters in the play and while it is well directed by Jenn Thompson the one flaw is that she never clearly delineates whom they are when we first meet a few of them. It is not until later in the play that it becomes clear. It does not diminish your enthusiasm for the work but would help to know earlier. We learn Percy Massey (Avery Whitted) is Lily's brother and Sybil Frost (Claire Saunders) his fiancé. While Whitted is quite good in a very calming and quiet manner (you can read his feelings from his facial expressions), I did find Saunders' character a bit too silly. And found the Wilson's neighbor Morton Leslie overplayed by Brian Owen. He is supposed to add humor to the role but his boisterous behavior is over the top. 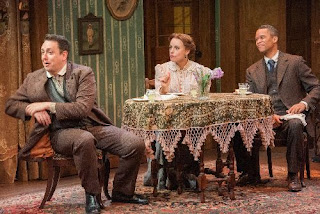 Things come to a boiling point when it is announced in Lily's parents' house in Chiswick about what Charley wants to do. This is most definitely not well received by Lily's mother, Mrs. Massey (Amelia White) nor her father Alfred, (Anthony Cochrane.) However, this is far from the way her feisty, adventurous sister Maggie (a wonderful Olivia Gilliatt) feels about the matter. She encourages Charley to make this move. Maggie's beau is the quiet Walter Foster (Ned Moyes). Maggie only wants to marry Walter to quit her shop job and hoping he wants to travel around the world exploring and finding a new position. But Walter is very content and working where he currently is. I can only imagine what audiences must have thought of a woman who is encouraging her brother-in-law to move so far away without his wife. Maggie's expression about "seeking one's fortune" must have turned a lot of heads back in 1909 when the play was first produced. And what makes Charley even more determined to escape this staid life is probably seeing Lily's family enjoying a Sunday afternoon singing songs around the piano. This is not the life for this adventurer. 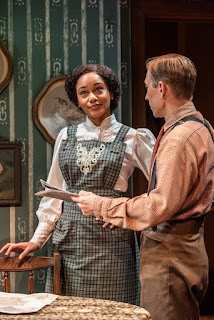 As lovely as the set by John McDermott is, what is truly ingenious is the inventive way it changes from the Wilson's house to the Massey's and back again with the actors moving the set. I have not seen something like this in a very long time and it is done easily with great precision.

There is a bit of a surprise at the end of the play which had me think if Lily is shrewder than we think. Not sure if this was Baker's intent but creating such an independent woman as Maggie I just wondered if she was creating a different Lily than we saw earlier. Most likely just a farfetched thought on my part but then you just never know.

Posted by TheaterTime at 4:15 PM No comments: