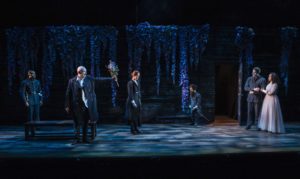 When I first heard Roxanne (Jasmine Cephas Jones) utter the word "Wow" at the beginning of the misguided New Group production of the musical "Cyrano" based on Rostand's novel and at the Daryl Roth Theatre I knew we were in trouble. It is not so much that I aim bothered by anachronisms, but it just set the tone for one of the worst productions of Cyrano de Bergerac I can remember. And to hear Cyrano (Peter Dinklage) and Christian (Blake Jenner) say "Whaaat?" was even too much for me. 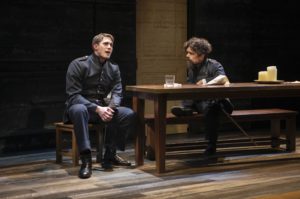 The big problem is that the play as adapted and directed by Erica Schmidt is devoid of any humor so inherent in Cyrano's character. As played by a too serious Dinklage with a basso profoundo singing voice he wears no prosthetic nose.  Dinklage is an otherwise fine actor in all he does, yet here he is instills Cyrano with ceaseless anger. Even what should be a gorgeous moment when he meets his friend Roxanne (in the book she is his distant cousin) at the local bakery thinking she is going to confess her love for him it is played with so little emotion on his part. When he hears those fateful words of her loving Christian you should feel how it "pierces his heart" but Dinklage just remains with a scowl throughout. Cyrano always felt his greatest asset was his panache. There is no iota of that in Dinklage's portrayal. 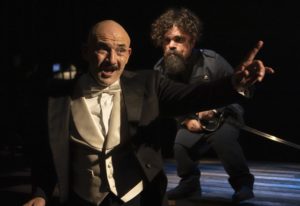 There are just too many scenes that are unintentionally humorous. During that meeting with Roxanne,  in the background we see bakers in slow motion spreading flour all over as if they were snow showers. The battle scene in the second act is played out like a facsimile of the one in   "Les Miserables" in slow motion on a slanted platform that the soldiers slide down. And the last scene with Roxanne at the convent with the once cruel De Quiche (Ritchie Coster) is not very believable. He is supposed to now be her friend though nothing much leads up to that at this point. We don't see the transformation of his villainy to his mellowing.

The cast is adequate but never captures their roles with any type of fulfilment. Jones seems to be acting in another time period and her singing voice has a warbling character. I was also not sure why she is wearing a blue rayon dress in one scene then something more time appropriate the next. Jenner is too silly for the more capable Christian. Never felt for one moment he was the great soldier he was supposed to be. 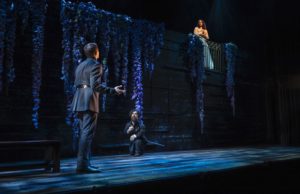 The score by Aaron Dessner and Bryce Dessner is generic throughout  and the lyrics by Matt Berninger and Carin Besser is sophomoric. Take for example, "No Cyrano, I won't let you go. I'm alone Cyrano. I've nowhere to go." If you want to hear a truly memorably lush score with poetic lyrics let me direct you to "Cyrano" the majestic musical starring Christopher Plummer. One of the most gorgeous songs written for the stage "You Have Made Me Love" will bring you to tears.  Sadly, this score falls completely flat.

The near empty set is by Christine Jones and Amy Rubin and the minimal choreography is by Jeff and Rick Kuperman. Not sure why two are needed.

Too bad this version does not work more than a pale Spark Notes production which should appeal to high school students who may have just read the play. For others, I would easily pass.


Posted by TheaterTime at 8:27 AM No comments: