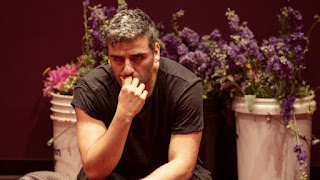 Hamlet--Playing A Tragedy For Laughs

I first came upon the brilliant actor Oscar Isaac in the off Broadway play “Grace” a few years ago. While the play itself was fair, Isaac took the stage by storm especially in his one scene where his primal scream was electrifying. He has proven to be just a fine an actor in films, most especially “Inside Llewyn Davis” and the more recent “The Promise.”

In Sam Gold’s muddled new version of “Hamlet” at the Public there are a few saving graces and Isaac is certainly at the top of that list.  As the famous Dane he is true to the character in occasionally being deep in thought though not as contemplative as portrayed by a slew of fine actors including both Ralph Fiennes and Jude Law both of whom portrayed Hamlet on Broadway. Isaac plays him with a visceral, emotional ferocity none of which I have seen before. This is not to say that the actor becomes so demonstrative that his famous soliloquy “To be or not to be” is less than introspective. He is experienced enough to know when to come on strong and when to be pensive.

Yet, as terrific as he is and almost worth the endurance test of a “Hamlet” which runs close to four hours with two intermissions, Gold whom I normally have a fondness for with his originality flounders badly here. I admired the director’s deconstructing last season’s  “The Glass Menagerie” which worked beautifully for me and his placing actors right at the very front of the stage in his powerful “Look Back in Anger” a few seasons back. However, here he has turned what is considered one of the finest pieces of literature into a silly, convoluted mess.

Gold who found much more success with his thrilling production of  Shakespeare’s “Othello” from last season staged the opening scene of that play in the dark. While I had some reservations with that, his staging the opening of “Hamlet” also in darkness makes more sense. For it is in the dark when suddenly a faint light comes on and  the two officers on night watch see the ghost of Hamlet’s late father who was murdered by his brother Claudius now King of Denmark. 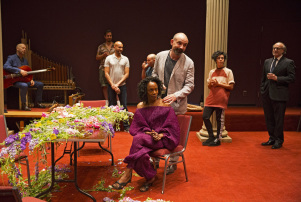 Gold has the nine actors doubling various parts which does work although some of the other performers do not match up to the superiority of Isaac.

Ritchie Coster portrays both the Ghost and Claudius and is a bit too laid back as the latter. His calculating nature is never forthright and his crazed desire for power never is convincing. The  usually fine Charlayne Woodard makes for a less than impressive Gertrude and is not helped by costume designer Kaye Voyce putting her in an unflattering pants suit or is  lounging pajamas?  Roberta Colindrez and Matthew Saldîvar  who was quite funny in “Honeymoon in Vegas” and touching in “Daphne’s Bare” are both far from the bumbling and crowd pleasing clowns Rosencrantz  and Guildenstern. I have never seen such lumbered portrayals of both those characters as portrayed  these two actors. The famed line “Frailty thy name is woman” certainly does not apply to the lasagna (not kidding) eating Ophelia played too strongly by Gayle Rankin. Gold has her singing some blue grass style number in her mad scene. Instead of her being vulnerable she has a hardness that you would expect to see in the new Netflix show “Ozark.”

Yet, on a more positive note the always reliable Peter Friedman does quite well as the pompous Lord Chamberlain Polonius although having him sit on a toilet giving instructions to his son Laertes (a fine Anatol Yusef) was absurdly foolish. Speaking about foolish, having Ophelia drown herself by turning on a garden hose over her head is dumb enough without having her then falling on her father’s grave with. Keegan-Michael Key does well as Horatio although in the staged play “The Murder of Gonzago,” he plays his scene for slapstick laughs going way overboard.

The purpose of that “play” which mirrors the death Hamlet’s father  has added lines written by our hero pointing  an accusatory finger at Claudius. Yet, for some inexcusable reason Claudius leaves as “Gonzago”  begins which makes no sense whatsoever while  Gertrude’s reaction is so unemotional it is as if she is on a sedative.

While Gold does adhere to Hamlet’s demise at the end of the play it makes little sense  having both Claudius and Gertrude remain alive. Talk about deconstruction.

If you are well acquainted with the play you might find yourself shaking your head at much of the director’s interpretation, yet if you are unfamiliar with it you certainly will be completely  baffled at its conclusion if you last that long.

PHOTO CREDIT: CAROL ROSEGG
Posted by TheaterTime at 7:21 AM 1 comment: 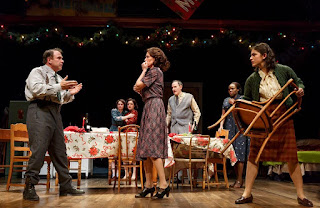 Meghan Kennedy’s upsetting new play “Napoli, Brooklyn” at the Roundabout at Laura Pels Theater is very well intentioned, but she is tackling so many topics in this family drama that  there is a scattershot feel. She writes quite well for individual scenes but as a whole the show becomes overbaked and, at times, not quite believable.

Taking place in 1960 which has a significance that comes at the end of the first act, it  concerns an Italian family with the patriarch Nic Muscolino (Michael Rispoli) a brutish and tyrannical father and husband who runs the family not so much sternly but with physical abuse. We discover that when  his youngest teen  daughter Francesca (Jordyn DiNatale) whom we learn is gay cuts off most of her hair he forcefully attacks sister Vita (Elise Kibler) who is protecting her. He does such forceful damage to Vita that it sends her to the hospital with a broken nose and ribs among other injuries. He has near psychotic rage that Vita eventually ends up in a convent for protection much to her dismay. There is also another sister Tina (Lilli Kay) who works in a factory and either has learning problems along with probably dyslexia since she has an inability to read. She works with Celia Jones (Shirine Babb) whom she has a good relationship with although it is unclear if Celia is doing something that could cost her her her job. 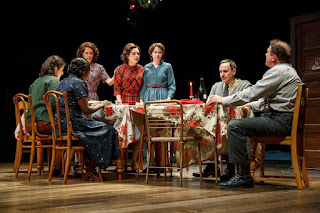 The matriarch of the family is Luda (Alyssa Bresnahan) who also bears the brunt of the sadistic Nic who burns her with his cigarette during lovemaking.  Kennedy indicates the subservience of women from foreign countries to be a “good” wife no matter what. No matter how vicious Nic becomes (she does not even wince when he burns her) she is there for him.

There is a desultory feel to the writing in the first act in which we go from the home, to factory, to convent and to the butcher shop run by Albert Duffy (Erik Lochtefeld) who is secretly in love with Luda. Unbeknownst to them, his teen daughter Connie (Juliet Brett) is in love with Francesca and both decide to stow away on a ship to France. In their way of thinking lesbians are more acceptable in that country.

All these episodic scenes come to a crashing halt when something catastrophic, which I cannot reveal,  occurs just at the end of the first act. Set designer Eugene Lee has devised something quite amazingly effective which may jolt you from your seat.

The second act does gel better than the first and the Christmas dinner scene is powerfully played out.  While Nic makes a declaration of being a better man you know that can only last a short amount of time. Yet, the problem with the second act is that a number of the scenes just don’t ring all that believable. It is hard to believe the advice Luda gives to Corrine at the last scene in the play. While admirable, it is also rather foolish considering Corrine’s young age.  A decision that Nic makes which helps the family immensely just does not appear to be something he would do. 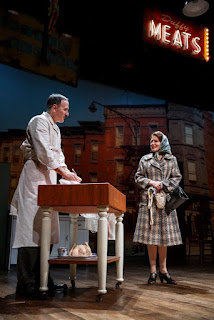 While Gordon Edelstein has directed the show admirably and with a pride in  standing up for yourself and the cast is quite good, most especially, Bresnahan, the playwright would have been more successful in focusing on limited scenes. While I admired her stance on the fortitude that women especially need to take to survive in a destructive household and wanting more for their children, the play is in overdrive mode which lessens its effect.

As an aside, I suggest you go into the lobby during intermission to read the information dealing with the true life event that occurs at the end of the first act.

Tickets are available at the Roundabout Theatre Company--Laura Pels Theatre 111 46th Street or by calling 212.719.1300. As of this date the limited engagement ends September 3.

Posted by TheaterTime at 5:53 AM No comments: