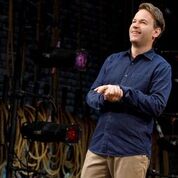 I have to admit that I never heard of Mike Birbiglia before I saw him a few years ago in a small off Broadway theater in his very funny and delightfully sweet “Thank God For Jokes. ” I thought he was going to be another standup comic which is about as bad as listening to a dentist drill. Yet, a colleague who has seem Birbiglia before highly recommended him and so glad I am quite grateful I did.

My concern in seeing his new show “Mike Birbiglia’s The New One on Broadway” at the Cort Theater was that it would lose the intimacy of a small theater. No need to worry. His warm and intoxicating personality shines throughout this one which is even better than the previous. 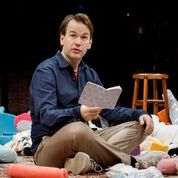 It is impossible to dislike this impish looking fellow who has turned 40 but looks much younger. What makes him so ingratiating is that he does not tell jokes but is a storyteller relating funny and touching elements in his life that are relatable.  This new show is actually in two parts. The first deals with his not wanting to be a father. He has a great marriage to Jen although for some inexplicable reason he calls her Chloe. He also has a great relationship with his couch. Yes, his couch. He loves that damn couch. For him it is not only relaxing but in a strange way I would think he would call it trustworthy. Don’t recall if he actually used that word. He starts the show by telling about picking up a couch on the street when living with roommates and then buying one. He almost had a coronary when he found out the price.

His imitation of his once mild mannered  now boisterous brother (has to do with having children, of course) is hilarious. His retelling about his far from behaved nephew is so believable you can understand why having children is not on the radar for this guy. 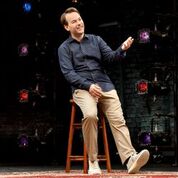 And then horror of horrors! His wife wants a child. Thus, begins the second part of the show listing seven reasons why this is simply not going to work for him.

One is quite serious. For such a young man, he has had a series of serious illnesses including a very dangerous sleepwalking disease (NREM) in which he fell out of a window. He literally needs to sleep in a sleeping bag wearing mittens so he does not unzip it. He could cause serious injury and even death upon his wife. He finds humor even as he describes getting into this “pod” as he calls it. The other reasons are quite funny, and I would not give any away. Speaking about not giving things away, something quite uproarious unexpectedly occurs later in the show. I would not even give a hint to what it is but it works and relates back to something in the beginning of the show. That’s it. I shall go no further. Just expect to laugh quite heartily.

You would think you had enough of his storytelling at the end of ninety minutes but you wish he would go on. He is the type of fellow you would like to invite over and have him tell you more about his adventures.He is that charming and throughout you know he loves to entertain. In between the laugher there are some very poignant moments.

If you have never seen him before I urge you not to miss this endearing actor (yes, he indeed is that) and if you have give him another go around in this winning new show.

Posted by TheaterTime at 6:19 PM 2 comments: