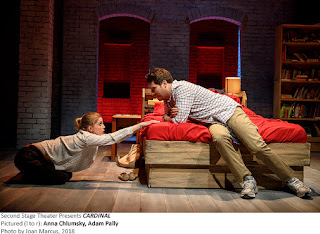 When the perky and frequently pesky Lydia Lensky (a somewhat shrill Anna Chlumsky) moves back to her town in upstate New York from spending time in Brooklyn she is quite astounded by the way her hometown has deteriorated. She comes up with the bright or, then again, not so bright idea of painting most of the town a red color to make it unique. Such is the premise of  Greg Pierce’s patchwork new play “Cardinal” at the Tony Kiser Theater. Pierce who was moderately more successful with his book to last season’s off Broadway musical “Kid Victory” finds himself here overwhelmed with ideas that go nowhere. There is an overabundance of thoughts that might be going on in Pierce’s mind but mapping them out into a play despite Kate Whoriskey’s capable direction falls flat and tiresome.

The once prosperous town known for making axels  has gone downhill and according to Lydia the only way to make it what it once was was making it special. As she points out to the newly elected mayor Jeff Torm (a lumbering Adam Pally) who had an affair with her sister, two other cities did exactly the same--a Moroccan city became all blue and a Mexican one yellow.  Lydia may not be the perfect person to convince the people in the town for she has less than a stellar reputation when as a high school student destroyed a generator resulting in a city wide blackout. At a town meeting in the school gym she makes her pitch which seems to go over quite well. It seems that the mayor likes it so much that he goes to bed with her in a rather ineffectual scene that is only included to show that Lydia wants to get even with her sister for bedding Jeff. Jeff himself has emotional problems taking pills which sometimes makes him rather lethargic which does not help the momentum of this play which feels longer than its ninety minutes. 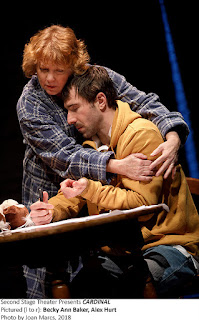 The only two people not so happy with this new development owner is bakery owner Nancy Prenchel (an excellent Becky Ann Baker) and her emotionally damaged son Nat (an equally fine Alex Hurt) who decide to leave the city despite the fact they have been living there for years. They are about the only two actors who give believable and full fledged performances. As they decide to leave the town (yes, it is eventually painted red) despite its attracting many visitors there is another conundrum. An Asian businessman Li-Wei Chen (Stephen Park) decides to run bus tours to the town to make quite a bit of money for himself and grown son Jason (Eugene Young.) It is at this juncture that the show becomes somewhat interesting when the inhabitants take a xenophobic turn to an outsider trying to make money off them. Things get worse with racial epithets and violence agains Jason.

Pierce has written a mostly theoretical play about how ideas to help a deteriorating town can take a downward turn but never involves the audience which is its fatal flaw. The play should pack a potency and punch which it severely lacks. 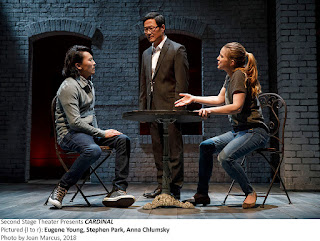