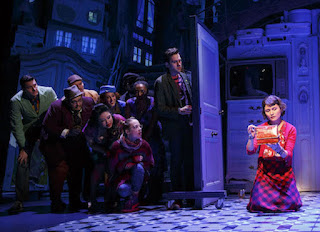 If the creators of the hopeless new musical “Amélie” at the Walter Kerr Theater did not want to purposely strip the French film of the same title all of its enchantment they could not have done a better job.

The fanciful movie with an utterly fetching Audrey Tautou in the title role has been turned into a charmlessly crass show with a tuneless score by Daniel Messé and both pedestrian and sometimes absurd lyrics by Messé and Nathan Tysen. What makes the musical even more of a failure is the undefinable book by the usually reliable Craig Lucas (“The Light in the Piazza.) Unless you are familiar with the film, and if not I strongly urge you to see it, you will most probably be completely lost here.

The musical, as the play takes place in and around Paris, although this show is about as French as being in Brooklyn. We first meet the young Amélie (an inert Savvy Crawford) whose flights of fancy have her imagining her goldfish has become six feet tall personified by  one of the show’s character’s wearing a goldfish head.  Perhaps, an entire fish costume would have been more authentic. And her seeing a nun wearing an alligator head is more foolish than sweetly funny.  Her mean and  unpleasant parents (Manoel Feliciano and Alison Cimmet) believe she has a heart problem and homeschool her. Her heart is enlarged because of her caring and generosity for others. It’s not too long before her mother is killed by a suicide jumper who makes his plunge off Notre Dame. The grown Amélie (Philippa Soo) gets a job at a local cafe with a bunch of eccentric characters. While Soo was a delight in both “The Great Comet” and “Hamilton” she misses the mark here. Expressiveness is what marks the young waif like character so appealing. Amélie is anything but bland but there is a kind of sullen almost fixed look of bewilderment in the face of Soo which does not work and we never see the inner workings of Amélie. 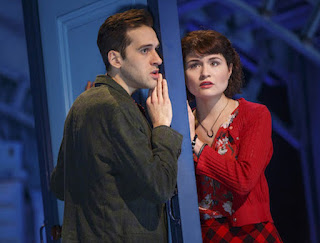 Lucas is so very interested in incorporating everything from the film into the musical that instead of any lingering development we have fleeting episodic moments.  It does not help that these off beat characters who inhabit the cafe narrate a lot of the dialogue which lessens the overall affect.

So much feels rushed in Lucas’s mishmash of a book which has lost every bit of the sparkle of the film. There is a short lovely scene in which Amélie  who greatly admired Princess Diana sees herself as the late woman helping out children suffering from AIDS in Africa. Then with a sudden charge out of the door appears one of the ensemble impersonating  an obese Elton John singing to her in a blasting and grating voice. Amélie’s first good deed as a woman is trying to find the now grown man who left some childhood memorabilia in the apartment she now  lives in. It is done so haphazardly that it makes little sense. She spends time with an elderly painter (a very good Tony Sheldon) but there is little connection between them thanks to the rather hectic direction of the usually very fine director Pam MacKinnon. She like Lucas just want things to keep moving with no semblance of continuity of events.

Adam Chanler-Berat is adequate as the offbeat Nino who collects discarded photos from a booth when he is not working in a sex shop.  To understand why Nino is obsessed with this odd desire you need to understand the reasoning of the“mysterious” man who is always taking the same photo. Of course, that is barely delved into.  And worse yet is the trick Amélie plays in the film on the dastardly green grocer which is never developed on stage. Is there any justification for him to insult the handicapped young employee when it goes no further. The fact that it seems to be played for laughs is worse is quite astounding. And don’t get me started on the now singing and  dancing gnome which is more ridiculous than funny. 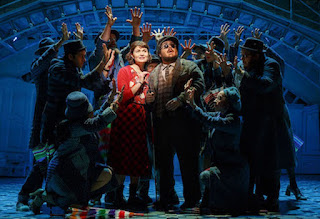 Most of David Zinn’s costumes are rather unappealing as is his set design although Peter Nigrini’s projections work quite well.

Making a musical out of a film which takes place all over Paris is not an easy achievement and all the various deeds that Amelie does is a monumental job for any creative team. But having a far better book, and  a score that is not only melodic but French sounding would help greatly. Nor is it an asset when lyrics, such as, “I met a plumber on the Metro with a toolbox. He was kinda bad but good in bed and fixed my leaky radiator.” Or how about, “Love is just another diagnosis like herpes, hepatitis, syphilis.”  What more is there to say other than this floundering  musical has all the effervescence of flat champagne.