There is always an element of surprise going to the Mint Theater which mainly  features forgotten and/or obscure shows. Some have had short runs on Broadway decades ago and others may have never played the New York area. While most I have seen there have been quite good and some superb there have been a few that left little impression. Unfortunately, the Mint Theater Company’s revival  of  “Days to Come”  which ran on Broadway back in 1936 and had a run of seven performances not one of their finest efforts. Actually, it is  perfectly dreadful. It is hard to believe that it was written by the firebrand playwright Lillian Hellman.

In all probability the theme of strike breakers in a small Ohio town and the injury they caused upon workers was quite a controversial topic then,  but now it has less of an effect.  The production is  misdirected by J.R. Sullivan who is not sure whether to keep this as a drama or comedy. And worse yet are the almost uniformly amateurish performances. Only Chris Henry Coffey as veteran worker, Thomas Firth, in the Brush Factory that is on strike gives a fine performance. But more on this later. 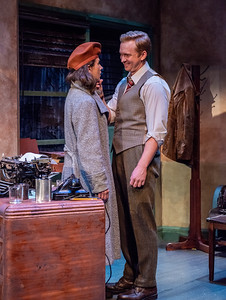 As in just about every Mint production show the sets are gorgeously appointed and set designer Harry Feiner has not let us down. The dark wood furniture and almost impressionistic  backsplash of an autumn scene is beautiful. And then the play begins.

The Rodman family owns the factory where the workers have gone out because of the drastic cuts in pay. The ineffectual Andrew Rodman (a gazed eyed Larry Bull) now runs the company after the death of his father and it is apparent that he has no idea how to be in charge of a board game let alone a factory. Andrew’s lugubrious sister Cora Rodman (a twitchy Mary Bacon) who is forever complaining about everything possible is impossibly annoying. It would have been more advantageous to have a character like Birdie in Hellman’s masterpiece ‘The Little Foxes” instead of this neurotic character. And Bacon so overplays the role in every gesture or facial expression. Andrew’s wife Julie (Janie Brookshire) is having an affair with his best friend and  lawyer  Henry Elliott  (Ted Deasy). The exceptionally bland Brookshire whose hairstyle is too modern looking for the play's time period has no chemistry with either Andrew nor Henry. And the latter relationship is more or less mentioned in passing. It is as if Hellman just threw this in for no apparent reason.   Deasy is generally acceptable for a while but Sullivan has him become exasperating. Roderick Hill is basically good as the labor organizer although his encounter with Julie in the ineffectual second act opening  scene  (she appears to have a love interest in him) goes nowhere. 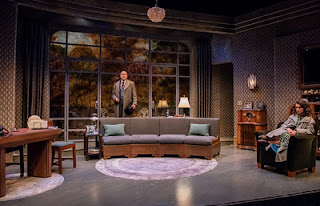 And worse yet is when the dangerous head of the strike breakers Sam Wilkie (Dan Daily) brings his two goons Mossie Dowel (Geoffrey Allen Murphy) and Joe Easter (Evan Zes) to cause harm to the 'scabs' who have been brought in to take over from the employees. Both actors overplay their roles and seem to think they are in a comedy.  They seem to be channeling the two characters  from “Kiss Me Kate”  and expect them to break into "Brush Up Your Shakespeare." When one of the two for some bizarre reason throws a knife at the other and several audience members start to laugh you know you are in big trouble.

Coffey is the best in the cast conveying sympathy and disgust with what has been going on with the strikers. He is the most believable and displays honest emotion when you learn what happens to his daughter.

Hellman wants to make a statement about injustice  but the play is so terribly structured with scenes that make little sense and not thought out it is hard that anyone could have made it work. But in its current presentation it falls even further into an abyss.

Tickets are available at the Beckett Theater at Theater Row 410 West 42nd Street or by calling 212.239.6200. The limited engagement ends October 6.

PHOTOS: TODD CERVERIS
Posted by TheaterTime at 4:08 PM No comments: 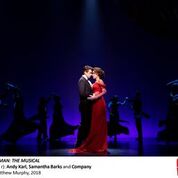 While there is nothing particularly wrong with the new show “Pretty Woman: The Musical”at the Nederlander Theater it just never radiates as you would hope it would. A big problem is that the show seems to have no identity of its own. While there is no doubt it needs to follow the immensely popular film (book by Garry Marshall and J.F. Lawton)  it is based upon, there is a mechanical feel to the show and that sadly might be due to the uninspired direction by Jerry Mitchell who also choreographed it.

The first question that most will ask is how Samantha Barks (Vivian Ward) compares to Julia Roberts' unforgettable performance as the lovable hooker who meets her Prince Charming Edward Lewis (Andy Karl). Barks has a powerful voice and a lovely presence with a smile that could light up a city. She certainly is good and wows with one of her big numbers “This is My Life” but never brings that certain excitement to the role. Again, the problem may indeed lie with Mitchell. The one big scene where Vivian comes out with that stunning red dress should produce “ah’s” from the audience yet met with general silence. Mitchell should have built this up rather than it just be another scene in the musical. Also, the scene where she and Edward go to the opera should have been a highlight where in the film she is so moved by “La Traviata” that she starts to cry. While that is not necessary here, more emotion on her part would have helped make what amounts to a tepid moment shine. 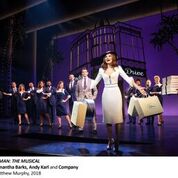 Karl is a wonderful asset in all he is in but here while also quite good seems to lack a certain amount of chemistry with his co-star. Granted, Lewis is not the most exciting character and Karl brings the necessary energy to him. But in the stage adaptation I  just never believed that relationship would take off as it does. His voice is superb as usual and there is one number where it felt like he was aiming to sound like the composer Bryan Adams who co wrote with Jim Vallance the pleasant if not memorable score.

The other cast members are terrific. Vivian’s best friend prostitute Kit De Luca is played with pizzazz by Orfeh whose dynamic singing voice matches the others. No affront to Barks,  but I would love to see what she would have done with the role of Vivian.  A standout is Eric Anderson who is the street hustler handing out maps to the local tourists in Hollywood and doubles as the hotel concierge. The always reliable Jason Danieley is good as Lewis's sleazy lawyer Philip Stuckey. It is unfortunate he does not have a solo number. 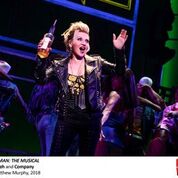 One big disappointment is the skimpy sets by the otherwise first rate set designer David Rockwell. Lewis’s penthouse apt in the hotel should be a knockout but here there is little to wow. Unfortunately, this is the same for most of the scenes in the show. Even the big shopping scene in an exclusive store proves to be lackluster in design although Gregg Barnes' costumes are on target.
.
While the show is modestly entertaining it never charms you or entices you as you keep hoping it would. 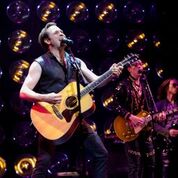 Gettin' The Band Back Together--Exuberantly Entertaining

Poor Mitch Papadopoulos. The stockbroker looks quite forlorn in the first scene in the exuberant, fun-filled and crowd pleasing new musical “Getting’ The Band Back Together” at the Belasco Theater. It is Mitch’s birthday and he has lost his job. So, what is this 40 year old played with dynamic energy by Mitchell Jarvis going to do except move back to Sayreville, NJ to live with his sultry looking  mother Sharon played with vivacity by Marilu Henner. He finds out that her and his friend Bart Vickers’  (gleefully played by Jay Klaitz) houses are being foreclosed by the villainous Tygen Billows (a hilariously evil Brandon Williams.) Bart is the math teacher who has little knowledge of the subject but if you start to question things in this show it will defeat its purpose which is just to tickle you silly.  It may be an original musical but there is not a lot of originality for it is a takeoff of other shows, such as, “School of Rock” as well as references to other musicals. Bart also has a not so secret desire for Sharon which he graphically sings to a mortified Mitch in the playfully distasteful “Bart’s Confession.” The buffed Tygen who  is the perfect example of brawn minus the brains, is full of malapropisms and generally walks off the stage looking at the audience with a smugness before finishing the end of what he wants to say. He is accompanied by his two equally dopy cohorts played with zestful enthusiasm by Ryan Duncan and Garth Kravitz. Kravitz  doubles as the emotionally overwrought lounge singer Nick Styler and has the show stopping “Second Chances.” 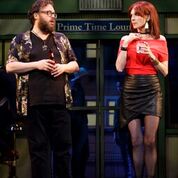 Mitch makes a deal with Tygen who will forgo the foreclosures for a chance to regain a trophy he lost to Mitch’s band when they were back in high school.  Thus there is a battle of the bands. Mitch wants to reunite the original band which includes Bart;  Sully Sullivan (Paul Whitty) who is a policeman not really interested in continuing his job; the dermatologist Robbie Patel (Manu Narayan) who does not want the arranged wedding his father has planned; sixteen year old student of the lovable Bart w Ricky Bling (a terrific Sawyer Nunes) who rocks a Jewish wedding as a rap singer.

There needs to be a love interest and Kelli Barrett perfectly fits the bill as waitress Dani Franco.  If all of this written by Ken Davenport and The Grundleshotz  sounds terribly trite, well, it actually is. But one of the reasons why is all works besides the tremendously talented cast is that it has both a catchy score and some wonderfully funny and purposely insipid lyrics by Mark Allen. 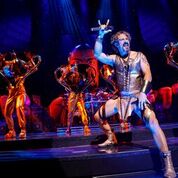 Derek McLane has created a set that is reminiscent of a small town with a traditional New Jersey diner which is named after one that was sadly torn down, the popular PeterPank. And his amusement park set with great lighting Ken Billington may not look like Great Flags Great Adventure but captures it enough.

Chris Bailey’s choreography may not be all that inventive but it surely is energetic and the wonderful John Rando (“Urinetown”) is the perfect spearhead for this type of show with his lightening speed direction.

Don’t look too hard at the material and you should just have a blast which is what those involved intended.

PHOTOS: JOAN MARCUS
Posted by TheaterTime at 6:27 PM No comments: