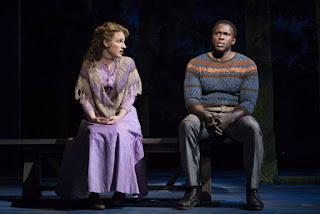 Carousel--In Search of Julie and Billy

If there is one musical that just about guarantees getting  the tissues out, it is Rodgers and Hammerstein’s glorious “Carousel.” I was enraptured when I saw the unforgettable 1994 Lincoln Centre production. So, I was thrilled to hear that it was coming back with two usually excellent performers Jesse Mueller (“Beautiful” “Waitress”) and Joshua Henry (“The Scottsboro Boys” “Violet.) Yet, by the end of this misguided revival directed by Jack O’Brien at the Imperial Theater, I was left quite dried eyes.

First, the best things about the show which  stand out in a striking form. The opening scene though from from remarkable was pleasant enough with the irrepressible “Carousel Waltz” playing showing Billy Bigelow (Henry) as the carnival barker. The nice switch it that you get the impression they are all in heaven which appears to be a harmonious place resulting in probably the only time you see Billy smile. Add to that is the superb orchestrations by veteran Jonathan Tunick. 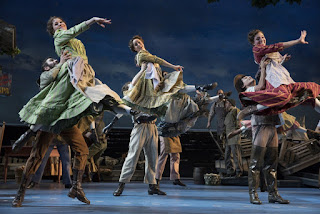 The scenery by another superb veteran in the theater, Santo Loquasto,  has devised an authentic looking set of late 19th and 20th Century Maine with the sailboats on shimmering water and his frequent use of diaphanous curtains that adds this “heavenly” quality to them as they gently glide across the stage. Ann Roth’s appealing  costumes also have the look of the times.

Justin Peck who is with the New York City Ballet has done a spectacular job of choreographing the show in the original form but never copying the immortal Agnes de Mille who was responsible for its first production.  The movements of the dancers is breathtakingly sublime and accomplished as if they are floating in midair.

As the brassy Carrie Pipperidge and best friend of the demure Julie Jordon (Mueller)  Lindsay Mendez almost runs away with the show displaying both humor and a great singing voice. She eventually marries the up-tight but liable and hardworking Enoch Snow (a delightful Alexander Gemignani.) 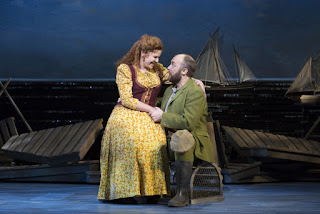 Sadly, the big problem deals with the complete lack of chemistry between the two leads. If you don’t believe in the kind of “love at first sight” between the quiet and reserved Julie and the ill tempered roustabout Billy you are in trouble. And we are indeed in trouble here.

Both Mueller and especially Henry have displayed their acting chops in other shows excellently. So, what has gone wrong in this production? Mueller is so unassertive that she almost becomes part of the scenery. True, her voice is lovely but her Julie is devoid of any personality. And if you have a forgettable Julie Jordan you are in trouble. You need to feel for this young woman but she left me totally cold.

As for Henry who knocked me out in the much underappreciated “The Scottsboro Boys” he comes on much too strong here. There is no nuance or balance in his performance. Yes, his voice is tremendously effective but he never captures the charisma or charm of the ne'er-do-well Billy. If Billy was always as full of anger as displayed by Henry,  I doubt he would have been as successful as a carnival barker with the women supposedly falling in love with him. His duet with Julie, the unimaginably beautiful “If I Loved You” left me completely frozen.  I wanted ever so much to see the attraction between these two characters but there is none. His “Soliloquy” while sung with great authority misses the mark again because his Billy never seemed to believe in himself. Someone who could really enjoy having a boy and doing all the things a father does with his son is not realized. And when he believes that  he may have a daughter there is no real softening of his delivery. It is sadly all one note.

If you  try to concentrate on the production numbers and the other cast members along with that ethereal score you will definitely be entertained. Look for no more.

Posted by TheaterTime at 6:32 AM No comments: 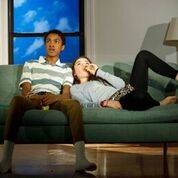 Lindsey Ferrentino is a playwright who knows how to combine humor along with grief and compassion in her plays. Her “Ugly Lies the Bone” was a moving tale about a returning physically scarred female  war veteran trying to put her life back together. Her “Amy and the Orphans” dealt with family relationships and new discoveries about themselves.  Ferrentino's current and heartfelt new play “This Flat Earth” at Playwrights Horizons deals with the aftermath of a school shooting focusing on one thirteen year old Julie (an unforgettably good Ella Kennedy Davis) who finds it difficult to return to school after a recent dedication ceremony for a deceased student,  Noelle. The school is to reopen the following day.

Ferrentino and the perpetually fine director Rebecca Taichman(“Indecent”) both have the ability to understand young people and their moods as is evident in this slightly flawed but, nevertheless, absorbing new play.

Dane Laffrey’s set is on two levels. The bottom floor is the apartment shared by Julie and her single parent dad Dan (Lucas Papaelias) who is struggling to make ends meet while working at the water company. Upstairs is the elderly woman Cloris (Lynda Gravatt)  who is bit of an enigma. She is a solitary figure who never seems to leave her apartment but would rather read while putting on a Bach Cello Suite on her phonograph.  As a nice touch, there is an excellent cellist (Christine H. Kim) who plays the composition  in the audience. 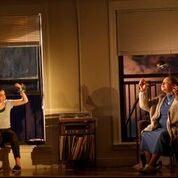 The play begins on a playful note with Julie and her friend Zander (an excellent Ian Saint-Germain) watching a film on a laptop while he would prefer getting just a bit romantic by kissing her.   Much of their dialogue is pure teenage banter including  her wanting  to move to Japan because she heard that they have the ability there to increase her “boobs.”

Her dad arrives with Noelle’s mom Lisa (a very believable  Cassie Beck) who has asked Dan to store boxes of tinned popcorn that her late daughter won in a fundraiser. Lisa is barely holding it together and through the smiles and attempts at laughter she breaks down into bouts of tears.

We later find out that Julie really should not be attending this particular school she is because she is out of  district.  Her father lied to the school administrator about exactly where they live so  Julie who is a talent violinist could benefit from school’s superior music program rather  than the other one closer to her  home. Things take an unfortunate term when Lisa finds this out.

Some aspects of the play don’t exactly ring true. Julie is surprised to learn this is not the first school shooting in the States. It is hard to believe that no student, especially Zander, would not have discussed this. Also, Lisa’s reasoning to alert the school about Julie’s home location seems too far fetched even with the reason she gives. 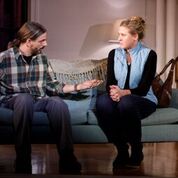 Because  Ferrentino exudes such warm humanity in all her works without being maudlin it is easy to overlook these moments.

While Papaelias seems a bit uneasy in his portrayal of the widowed dad, the others are solid in their roles most especially  Davis who runs the gamut of emotions as a teenager. Her relationship with Zander is especially natural and  her final moment alone of the stage is breathtaking.

Growing up with all the pains involved is not easy for a teen not going through a catastrophic school incident let alone dealing with what has occurred. And the last scene has a transcendental and spiritual quality that will result in some discussion.

I always anticipate what Ferrentino is planning for her next play ever since the beautifully written “Ugly” and despite certain reservations here, she and Taichman have created a vivid work of  living with constant uncertainty in the world


The play runs through April 29.