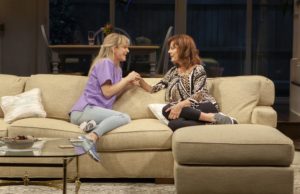 Happy Talk--Not Much of that Here

Jesse Eisenberg's new play "Happy Talk" presented by The New Group at the Pershing Square Signature Center is not in the same league as his previous one "The Revisionist" in which he sparred perfectly with Vanessa Redgrave. Actually, this new work is more of a run of the mill comedy/drama sitcom until it turns oddly creepy towards the end. If there anything that makes this play worth interesting under Scott Elliott's direction it is the remarkable Susan Sarandon. This is not to belie the other performances especially the always welcome and immensely talented Marin Ireland. There is just something so delightfully sinister about the way Sarandon has of gnawing into a role with such subtlety. Watching the excellent Showtime series "Ray Donovan" Sarandon exudes charm with a winning smile and in the next moment can order the death of someone who did her wrong. Here it is not that extreme,  but she has this unsurpassed skill to make have you feel sorry for her and then slowly but almost manically turns the tables where you see what a loathsome character she really is. 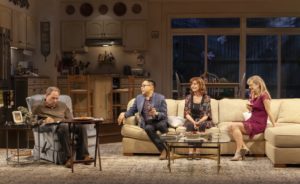 She portrays Lorraine who is appearing as Bloody Mary (speak about politically incorrect casting!) In what sounds like a perfectly dreadful version of "South Pacific" presented at the Jewish Community Center. She flits around the stage informing her generally non-communicative husband sitting in his recliner addicted to books about the Civil War how much she adds to the role. And how her fellow actors adore her. Well, it is evident they feel the opposite for when they all go out for a drink without inviting her.  Of course, she makes up some flimsy excuse for not being included. Watching her carefully you know she is quite aware of their snub but is in her own theatrical world of self importance.

Her husband Bill (a very fine Daniel Oreskes) whom she frequently makes caustic remarks to  is suffering from MS and depression. Does she love him? Not really and you are never quite sure if she is capable of loving anyone but her narcissistic self. Her unseen mother whom she not so affectionately calls "the beast"  is in the other room and cared for by live in Serbian caregiver  Ljuba (an excellent Marin Ireland.) Lujba also attends to Bill except for Lorraine microwaving his food. Lorraine has little patience with Bill thinking if he really wanted to do more even as he writhes in a sudden onset of pain he certainly could. 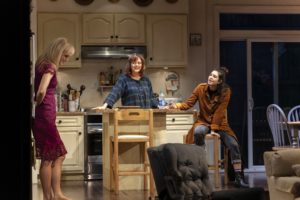 Being undocumented Ljuba knows her troubles would be over if she could find a husband. She has saved $15,000 which she keeps in Lorraine's mother's room to paid towards finding a man for marriage. Lorraine being the magnanimous person she believes herself to be said she will find someone who will be willing to accept this amount instead of what most guys would want. The fellow Lorraine chooses is her flamboyantly gay co-star Ronny (an exceedingly funny Nico Santos)  from the show. I kept thinking how is this fellow going to convince immigration officials he is actually marrying Ljuba for other than devious motives. Surely, he does not give an impression that this will be anything other than a marriage of convenience. But by the play's conclusion there is something that clicks as to why Lorraine has chosen him.

In the midst of all this Bill and Lorraine's estranged (mostly from her mother) daughter Jenny (Tedra Millan) breaks in at midnight through the back screened door (a lovely set by Derek McLane)  which makes little sense. She plans on leaving he country with her new husband and wants to say goodbye to her father whom she loves. There is a very tender and loving interplay between father and daughter which is short lived. Lorraine is so in her own insular world that even  Jenny's diatribe against her mother means little and she pays no attention rather concentrating on her acting.

Lorraine really shows her  own malevolent character near the end in which I will go no further except to say that Sarandon sinks her claws into that moment with such a fallacious smile.

While all give their all the play itself seems to go awry throughout not really sure what it wants to be other than a character study of the lead. When Lorraine feels that Bloody Mary is "broken woman" she might easily have been speaking about herself.

Posted by TheaterTime at 5:22 PM No comments: 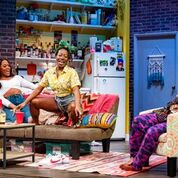 While there is certainly a plentiful amount of audacious humor in Aziza Barnes' new comedy "BLKS" at the Robert W. Wilson MCC Theater Space, the characters remain stagnant. As much as I was waiting for something of real interest to occur in the lives of the three 20-something African-American women, especially at the conclusion, it never materializes.  While the three roomates have an undeniable camaraderie their partying, boozing and sexual encounters become tiring. What is really disappointing is that the male character, Justin (an excellent Chris Myers),  who is a respectable guy is treated with disdain. If Barnes had created a loathsome character it would have made more sense in the realm of the play, but he plays an admirable fellow who could have added a dose of seriousness to the play.  Barnes concentrates on the graphic and brazen comedic aspects of the show with results resembling a cable sitcom. 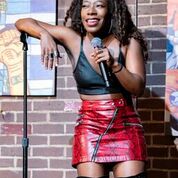 The play begins in a Buswick apartment with a lot of moaning and then a scream when Octavia (a great Paige Gilbert) runs out of the bedroom  telling her female partner Ry (Coral Pena)
she has a mole on her clitoris. While certainly not funny Barnes does make it humorous especially because of Gilbert's hilarious comments thinking the worst. The second roommate Imani (an excellent Alfie Fuller) not sure what to do,  runs out to CVS to get bandages. Amidst all this calamity the other roommate math-whiz June (Antoinette Crowe-Legacy) returns to the apartment in a state of distress finding out that her boyfriend has again been cheating on her. Probably around the eleventh time. While Crowe-Legacy is very good she does have a tendency to yell out her lines throughout the show which director Robert O'Hara could have curtailed. And for some strange reason a good deal of the staging  is on the left side so if you are seated on the right you can easily miss a good deal of the dialogue spoken with rapid fire delivery. It is when the women venture out to a club that the play takes place place more center stage. 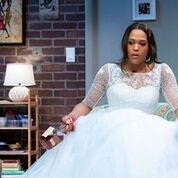 Outside the club, June is accosted by a thug (Myers in a dual role)  who has been abusing a white woman (Marie Botha). Both Imani and Octavia try to get the police to come but being a basically a non white area they don't have much success being told that all units have been dispatched elsewhere. It is in the club that the play feels forced with silly humor, such as, Octavia meeting a serial thief of panties and June's encounter with Justin. There is a potentially good scene in which would be standup comic Imani tries to recreate Eddie Murphy's "Raw" routine only to fall flat. You later find out in a too quickly done scene the meaning of the that DVD in Imani's life. 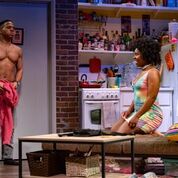 There is a very touching yet fleeting moment where June is sitting in her bedroom in a white gown she wore at a gala her boyfriend took her to.

While Barnes is concentrating on the laughter which is fine, it deflates the issues facing these young women. The last and most troubling scene seems to indicate that they are on a vicious cycle and the potential that the characters fails to emerge.


Posted by TheaterTime at 6:22 PM No comments: 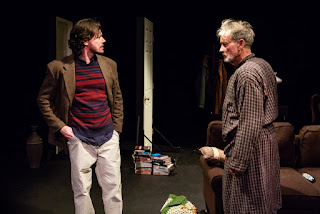 The writers (Gabi Mor & Eva Mor) of the well intentioned but not completely believable "The Bigot" at the Theatre of St. Clements explain in the program that both have met discrimination in their lives. One being religious and the other cultural. The message in this play is that according to the playwrights being kind and trying to understand a bigot, and one can't imagine one as worse as Jim (a very good Stephen Payne), will eventually work. That is hopeful thinking and if someone is not as extreme as Jim who hates Jews, Moslems, gays, all immigrants, etc. it would make sense. But he is such a cretin that it is hard to believe that even through the kindness of the lesbian couple living in the aparment across from Jim, especially what Aysha finally does for him, he would change. 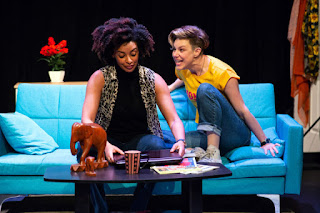 Jim lives alone while his unattached son Seth (Dana Watkins) frequently comes in to check on his father who is going through dialysis and hoping for a kidney transplant. While Jim calls Seth "son" Seth only calls him Jim for reasons we eventually find out,  although the show is so predictable in so many areas it is not difficult to figure out why. Seth teaches history at Brooklyn College and what makes little sense is that he tries to change his father's belief that slavery was necessary by giving him a book to read and wanting to debate the issue. It is nearly impossible to believe that Seth would go through this trouble when he knows what his father is like.

The interracial lesbians well played by Jaimi Paige as Paula and Faiven Feshazion as Aysha differ on their approach to their neighbor.  Paula keeps going over bringing Jim food which he won't eat because of obvious reasons. Even when she touches him he exaggerates that touching him is literally contaminating him because of her being gay. But having the somewhat unrealistic fortitude she still persists. I never understood how she kept walking into his aparment which he never seems to lock. 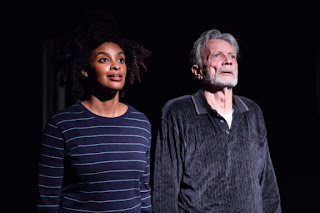 While Paula persists, Aysha gets more upset with her partner for volunteering to get herself tested to see if she is a match as a kidney donor.

The dialogue seems to be generally contrived and the ending just ridiculous. What is even more of a problem is that Jim's invective and repulsive anti lesbian comments had people in the audience laughing which I found surprising. Perhaps, just nervous laughter but not what the playwright's have intended. Surely, they were expecting some shock not the audience reaction.

Director Michael Susko for some inexplicable reason has the actors yelling constantly. Doesn't anyone in this play speak at a less that deafening decibel?

I respect both playwrights for their good intentions but the show just falls flat from the onset.

Posted by TheaterTime at 12:43 PM No comments: