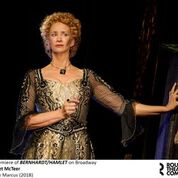 When Janet McTeer (“A Doll’s House” “Mary Stuart’) stands majestically forward at the start of Theresa Rebeck’s entertaining new play “Bernhardt/Hamlet”from the Roundabout Theatre Company at  the American Airlines Theatre” and starts quoting Shakespeare you hang onto every word. Her stance is as commanding as the words she is uttering. She is portraying the famed Sarah Bernhardt who indeed shook heads by playing the Dane shocking critics and audiences alike. The audacity of a woman playing a man’s part!  Yet, Bernardt points out men played women’s parts all the time, so why not do something different.  Acting is ingrained in our Sarah and McTeer portrays her with such authority and outrageousness that in any lesser hands it would not work. Bernhardt is a master of extravagances in her delivery while just speaking to fellow characters when not rehearsing for “Hamlet”  when not performing by flailing her arms in dramatic fashion. Her Bernhardt is always “on stage” whether addressing friends, her lover or son. She knows she is a renowned star whom audiences adore but has been met with hard times being nearly broke for her past plays were critical but not financial successes. 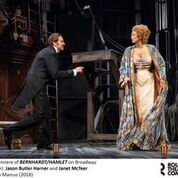 Jason Butler Harner who matches McTeer scene for scene is superb as married French writer Edmond Rostand (“Cyrano de Bergerac”) and madly in love with her. The chemistry that both actors instill in their roles is combustible. You cannot tear your eyes from them when they are in the throes of passion or anger. Harner who was excellent in portraying the emotionless FBI agent in Netflix’s “Ozark” is quite amazing here. He is razor sharp in his portrayal of a man caught between gale force devotion to Bernhardt and his wife Rosamund (Ito Aghayere).

When Bernhardt implores Rostand to rewrite “Hamlet’ without as she puts it “the poetry” he,  as well as the esteemed French critic Louis (Tony Carlin), think she is making a monumental mistake. Yet, Rostand is under her spell and decides to comply.

Later in the play we meet her son Maurice (Nick Westrate) who having arrived from the university is  concerned with his mother’s decision to have Rostand rewrite the play. Apparently, the entire city is making a mockery of this audacious decision on her part. 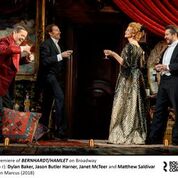 While the always excellent director Moritz von Stuelpnagel has proceedings moving at a full steam ahead momentum, things start to falter near the end with the arrival of Rosamond who explains how rewriting the play is having such an adverse reaction on her husband. She then goes on explaining Rostand’s new play “Cyrano” is a love letter to Sarah. This is where things go most decidedly off track. Instead of Rebeck having written some scenes with the new interpretation of “Hamlet” she has the actors reenacting the gorgeous scene where Cyrano secretly impersonates Christian the handsome but inarticulate soldier and declares his love for Roxanne. Now Sarah is no longer Hamlet but the devastatingly beautiful Roxanne and it adds nothing to Rebeck’s work. Also, what makes it even worse is that Sarah shows very little interest in the words and the scene never resonates as it has in actual productions of “Cyrano.” The most unbearably beautiful reenactment of that scene is from the underrated musical “Cyrano” with Christopher Plummer. Here is falls flat and is out of kilter with the rest of this fun filled play.

The incomparable set designer has created a gorgeous set with Bernhardt’s dazzlingly evocative dressing room with an array of colors and objects.

The rest of the cast is very good with a standout Dylan Baker who makes a hilarious Polonius in his scene from “Hamlet.”

Despite the fact that the digressing of the play in the last thirty or so minutes of the play, the two leads are superlative enough to keep your interest firmly intact.

Tickets are available at the American Airlines Theater 227 West 42nd Street or by calling 212.719.1300. The limited engagement ends November 11.

PHOTOS: JOAN MARCUS
Posted by TheaterTime at 7:17 PM No comments: