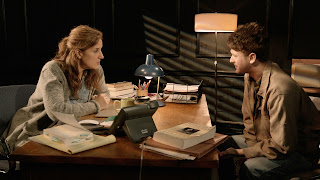 Adam Rapp's "The Sound Inside" which justly received superlative reviews when it opened back in 2019 on Broadway is now being streamed as part of TheaterWorks Hartford in partnership with Revisionist Films. It runs from now through April 30.

Whether or not you might have seen it in New York when it featured the amazingly gifted Mary Louise Parker (as Bella Baird) and newcomer Will Hochman (as Christoper Dunn)  who made a smashing  Broadway debut I urge you to purchase tickets (information below) to view this mesmerizing new production.

While I greatly admired the New York production, I did find it a bit bookish and was engrossed but wanted it to envelop me more than it actually did. Part of the problem then was that it played in a rather large theater. A smaller, more intimate one would have worked even better.  And now beautifully crafted by two directors Rob Ruggiero and Pedro Bermudez it still is an enigmatic work, but Rapp's gorgeous words come shining through in an even more resonant manner. I remember the lush descriptions in the dialogue although the humor which seemed to  to have escaped me then no longer does after this viewing. What might be lost in physicality of staging here works in other ways. 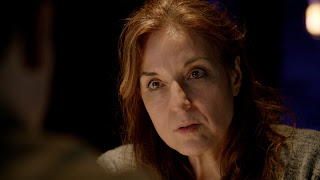 The first thing you notice is how physically different Maggie Bofill is from the original actor. Parker looked more of an academician (her character is a professor of creative writing at an Ivy League college) whereas Bofill's Bella has the look of someone who might have worked in any profession. I point that out because her less than scholarly appearance may have made Christopher more willing to open up to her. Either way makes Bofill perfectly  captures the sadness and loneliness of this character We are first introduced to her in a monologue about her life. Amidst the seriousness she does describe herself as "sneakily attractive." She loves the author James Saulter because he writes about infidelity, loneliness and divorce. While she was never married the disappointment in her life is quite evident. And to make matters much worse she is suffering from advanced cancer. There is no self pity in her monologue. She states the facts as they are.  No morose mournfulness. It is what it is and she will deal with it anyway she so chooses.  Deciding whether to have chemo or not is discussed later in the play, and she handles that with objectivity which seems to sum up her life. Yet, she does tell one hilarious tale of a one night stand which is refreshing from the heavy material. This is not only thanks to  Bofill's excellent performance but Rapp's elegiac writing which never veers into sentimentality. 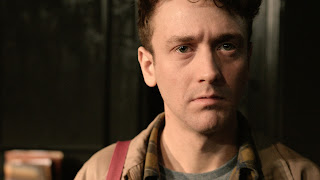 While in her office, the frenetic and highly intelligent Christopher (a superb Ephraim Birney) barges in. He refused to email her office to set up an appointment because of his distain for any type of technology. Is it any wonder he has few friends. His tirades against Twitter, etc. is instantly funny and makes a great deal of sense if not necessarily realistic in today's world. He still does a convincing job of stating his beliefs. Birney captures every nuance as the slightly peevish yet likable young student. It's not much wonder he appears to lack friends stating that when playing sports he is no more than a "dodgeball target." There is a discussion about "Crime and Punishment" which subtlety leads to concern that the murder which takes place in that book may have something to do with the novel that Christopher is currently writing.

Even though there is limited staging according to CDC guidelines there is never a claustrophobic feel whether they are in a restaurant or Bella's apartment.  Rapp shows the affection they have for each other but it never, thankfully, goes beyond a warm, platonic touch on the cheek. These two characters have more in common with each other psychologically than they even realize. 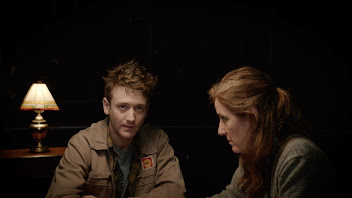 The chemistry between both actors is what makes this production really soar and makes Rapp's words even more glorious. When Christopher explains to Bella he stopped writing for a while because  somehow the story was actually writing him it sounds like an ominous comment and possibly prophetic one which I will go no further in explaining. When he states this looking at their faces you cannot help but notice a definite bond between them.

While the lighting which was so stunning when seeing the show live is a bit less effective because of  unavoidable limitations, you still see glimpses of the always excellent Amith Chandrashaker's (another designed the Broadway production) craft here. And may I add it in no way hinders the production.

This is a beautifully transfixing work which leaves you with no clearcut answers. A lot of "why's" might be your question to whomever you see it with but that is the mark of a skillful playwright. And that is what Rapp most certainly is.

Posted by TheaterTime at 8:04 AM No comments: