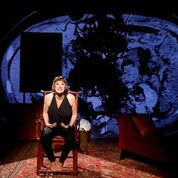 Writer/performer/activist Eve Ensler is responsible for the tremendously successful “The Vagina Monologues” which has been performed all over the world. Her new work“In The Body of the World” presented by the Manhattan Theater Club and at City Center Stage 1 chronicles her devastating battle with uterine cancer. It is an evening of such intensity told with such a forthright and heartfelt delivery by Ensler that you sit transfixed wondering how (and she does explain it) she dealt with this horrifying illness and what kept her spirits up. How she is able to perform this on a regular basis to audiences is a monumental achievement on her behalf.

Ensler who started V Day which is a day of protest against crimes against women begins by relating her visit to the Congo and the first story she tells is of an eight year old girl who could not stop urinating because of being repeatedly raped. Then goes on with an equally sickening  one about what occurred with an eighty year old woman. It is at this time she got her diagnosis which brought her to the Mayo Clinic. 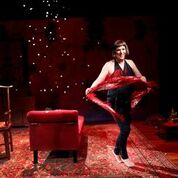 It is hard to believe that that the solo play has humor in it but it does which helps balance the pain that you feel for her ordeal. She calls the city of Rochester where Mayo is a “city of cancer” remarking about there being so many wig stores.

She does describe in detail about what she had gone through and eventually ended up in two different NY hospitals for further treatment. Never once does she succumb to self pity even though amusingly she does wonder if  all the drugs and sex she was involved with in her youth had any direct influence or if not then how she lived through those younger days.  What makes the play work so beautifully is throughout she builds a kind of analogy between what she must endure which is to her not as severe as the atrocities women must endure in places like the Congo.  It is that steadfast dedication to help these women that kept her going through all her surgeries and subsequent treatment.

There is one especially enlightening scene where in the hospital room there is  a large tree out her window. The superb projections are by Finn Ross. She watches it carefully through her radiation and chemo treatment and it comforts her knowing that as it blooms each season so will she get better for she must to help the women around the world who need her so desperately.

But Ensler had the determination to go on despite all the odds. While “Monologues” was a play that was geared greatly towards women “Body” can deeply affect both genders. It was unfortunate that there were so few men in the audience when I attended. Here is a play that both men and women can share together.

I recently read that “happiness is like moving on thin ice.” Ensler was most certainly in a precarious position but she fought to survive and we are thankful is continuing the work to help women whose lives would be forgotten if not for her.

Tickets are available at Manhattan Theater Club at City Center Stage 1 or by calling 212.581.1212. As of this date the limited engagement ends March 25.

Posted by TheaterTime at 12:07 PM No comments: