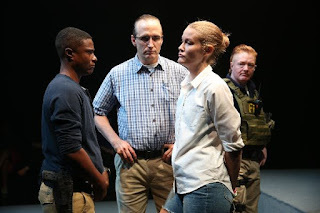 Perhaps, the question we should be asking about "Is This A Room" at the Vineyard Theatre is "is this a play?" Based on word for word FBI transcripts it tells about the interrogation of Reality Winner (Emily Davis) who was a former Air Force linguist and worked for the NSA is accused of removing classified material from the office and leaking it to the news media. The information dealt with the Russian interference in the 2016 election. You would think this would make for riveting, edge of your seat theater, but I kept thinking while watching of the famous line from the old "Dragnet" series "Just the facts, ma'am." It certainly is an interesting and sometimes fascinating work but feels like a rough draft. I kept thinking,"why isn't there a second act?" 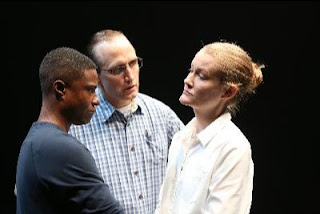 The play is staged in a kind of static manner by Tina Satter. She has her actors speaking in a kind of staccato fashion and you keep thinking you are listening to the actual tapes. You might think this makes it more authentic thought I kept thinking then why am I sitting at the theater when they might be accessible to listen to. Pete Simpson portrays Agent Garrick who speaks like the most inexperienced agent imaginable. He stumbles in his speech (not the fault of the actor) and there were moments you almost laugh at his inept statements he makes towards Reality. He along with Agent Taylor (TL Thompson) interrogate her at her home back in 2017. Reality is a cross fit and yoga trainer and seems confounded by all of this until you gather she indeed release the documents. There is also another character known as the Unknown Male (Becca Blackwell) although not sure why that the character is listed as such when FBI is on the jacket he is wearing. I use the term "he" although "they" might be a better term because Blackwell is "existing between genders" and prefers the term "they." Davis is quite good as Winner although she tends to speak very rapidly probably keeping up with her character's nervous nature. 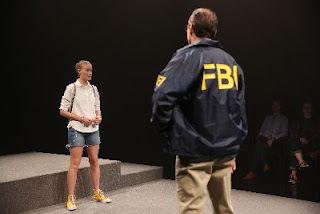 Satter also has directed with some  distracting touches (no need for the row of seats on other side of the platform stage designed by Parker Lutz) and having the unnamed agent roaming around her house  and removing her dog (a stuffed animal that greets you as you enter the theatre) and a stuffed black cat are unnecessary features. Also, there is little need during one interrogation scene for the lights to keep going on and off as to indicate a change time. More annoying than atmospheric. 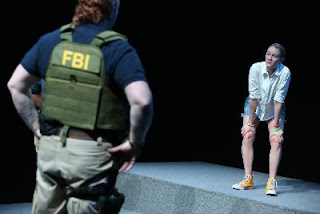 It is such an intriguing story that you want to read about her life when you leave the theater.  Yet, as a stage play it falls completely flat far from as compelling as it should be because you are only seeing the first interrogation. It ends so abruptly that I honestly thought there might be a talkback or, perhaps, an announcement of a  sequel to the play. Having a sheet on a table when you leave the theater where you can read more about her is far from sufficient.

Tickets are available at the Vineyard Theater 108 East 15th Street.


Posted by TheaterTime at 3:39 AM No comments: 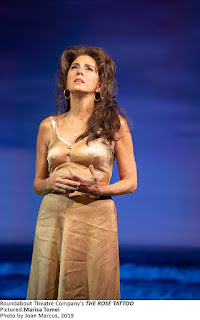 The Rose Tattoo--This Much Comedy?

I have never seen a stage production of Tennessee Williams' "The Rose Tattoo" although it is hard to imagine he intended it to be presented so over the top as it is by director Trip Cullman at the American Airlines Theater.  The excellent film version starring Anna Magnani who deservedly won an Oscar was serious yet had some comedic moments thanks to the antics of Burt Lancaster who played her love interest.  The play is more lighthearted than any of Williams' other works that I can recall, yet Pullman has turned it into a laugh fest with the audience laughing heartily. There are even some slapstick moments which make no sense. The theme of the play becomes so lopsided with performances all over the place that it is very disconcerting.

Marisa Tomei gives  a strong and earthy performance as Serafina Delle Rose until the comic touches become so heavy handed that she becomes awash in such silliness that all sensitivity in her character becomes lost. Serafina is madly in love with her sight unseen truck driver husband who as the play opens is killed  as he was hauling bananas and drugs. She is unaware of his corrupt behavior and falls into a state of depression never leaving her house. The neighborhood women act as a Greek chorus and frequently break into song which never coalesces with the seriousness of the play because of presenting it almost strictly as a comedy. They also become tiresome as the play continues. 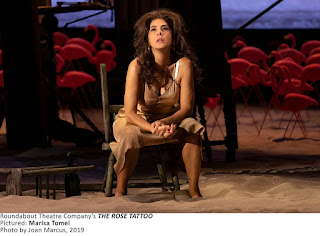 Serafina's lovely teenaged daughter Rosa (a good Ella Rubin) falls in love with Jack (Burke Swanson)  who is a sailor. Serafina spends more time praying to the cremated ashes of her husband as a kind of shrine rather than show any connection with her daughter. Here again Pullman slips up badly. There is no emphasizing the love that she really has for her daughter. They may fight and scream but her adoration of her daughter which is presented in spurts never radiates. Rosa and Jack are no more than stick figures when instead the play needs to show how much they care for each other. Actually, Swanson is made to look rather doltish which provokes laughter.

Things turn around and become even more ridiculous when the truck driver Alvaro Mangiacavallo Emun Elliott) comes to her house. They joke around to the point where the aforementioned slapstick takes over. So, when they start to have strong sexual feelings it feels forced and not believable.  Alvaro is a bit of a clown as he was represented in the film but then needs to become more sympathetic towards Serafina. Not the fault of Elliott who is a fine actor. He is just lost in this misguided production. And if you have little chemistry between both leads despite the fact both work very hard the play sinks. Even the tense scene where Alvaro unsuspecting approaches the sleeping Rosa which throws Serafina into a frenzy becomes absurdly humorous. 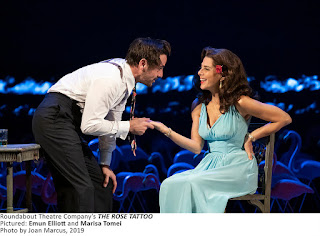 Tina Benko plays the casino blackjack dealer who also was Serafina's husband's lover in a white jumpsuit walking and acting like the faded movie star Alexandra Del Largo from "Sweet Bird of Youth."Constance Pullman struts around as the witch with a patch over her eye chasing the screeching neighborhood kids looking like she belongs in a "Pirates of the Carribbean" film.

Even before the play starts you are find something rather strange about Mark Wendland's set design featuring  rows of pink flamingos near the back of the stage and the never-ending rolling of waves along the back wall which you find yourself starting at during a lot of the play.

I am not sure if Cullman has ever directed a Williams' play before but after this one I shudder to think what he would do with the more popular ones. Who knows how he would interpret
"The Glass Menagerie?" I can't even begin to imagine.


Posted by TheaterTime at 10:59 AM No comments: 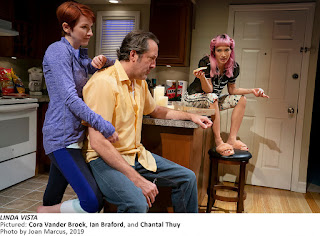 How do you figure out a guy like 50 year old Wheeler (a winning Ian Barford) in the frequently hilarious and yet tender and touching "Linda Vista" by Tracy Letts presented by the 2ndStage at the Helen Hayes Theater. He is a miserable mess. He has moved into a beautiful new condo in San Diego and that is probably the only good thing in his life. He is in the thoes of a messy divorce; his teenage son is addicted to humiliation porn; and he has a nowhere job as a camera repairman. It does not help that Michael (Troy West) the owner of the shop is a lewd guy forever making harassment comments about his younger employee Anita (an excellent Caroline Neff). I did wonder how Wheeler who has little money and having problems paying alimony can afford a condo with a great view (the lovely set by Todd Rosenthal.) 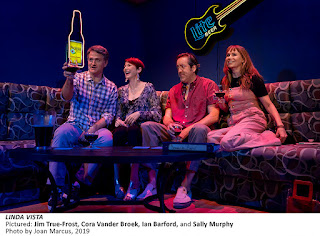 His best friends are the married couple Paul (Jim True-Frost) and the feisty Margaret (Sally Murphy) whom he once dated. It is easy to see why she is better matched with the laid back Paul than the complaining Wheeler. They set him up with the lovely life coach Jules (Cora Vander Broek) who has a stunning moment near the end of the play in standing her ground in dealing with Wheeler. You find out early in the play quite briefly that she has her own past romantic issues. While they don't exactly hit it off at the karaoke club in which Paul and Margaret join in for some earsplitting singing they start to have a romance. One of the funniest if not the most hilarious sex scenes I have seen on stage  occurs in Wheeler's bedroom. It is graphically but honestly and realistically  presented by director Dexter Bullard who keeps the long play running quite smoothly. I won't give anything away but will say that little is left to the imagination. What makes is far from pruient is Letts' incisive and genuine dialogue. You would swear these are people who are real people from everyday life. Part of me wondered if any of this was autobiographical it is so authentic. 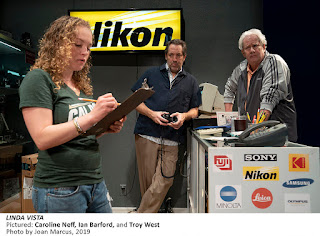 The other character who plays a pivotal role in the proceedings is the lovely twenty something pregnant Minnie (Chantal Thuy) who was living with her boyfriend in Wheeler's complex with her boyfriend who throws her out. Feeling sorry for her Wheeler takes her in even though he spends every night with the lovely Jules either at his place or hers. One of the most prophetic lines which I won't divulge is what Minnie tells Wheeler which he chooses to ignore. 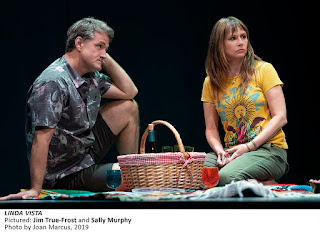 The performances are all so markedly on target. Barford turns Wheeler into  a character whom you want to feel sympathy for but find yourself disliking as the play goes on. He thinks he is one of those very hip guys although his hip (sorry for the bad pun) is causing him back problems. Seeing him trying to dress as a rocker at a picnic is so ludicrously funny. Yet, as much as you will grow to find him less likable Barford still imbues him with a certain amount of sympathy. He truly is a mess both emotionally and physically. Vader Broek's emotionally touching scene with him at the restaurant  is beautifully played and I cannot imagine anyone not sometime in their life finding themselves in such a similar situation.  All the other actors play their roles strongly and sincerely.

What makes this play which under any other writer could be little more than an above average sitcom is the observant writing which makes you reflect on your own relationships and life. Next to Letts' wonderful "August: Osage County" this is his best play to date.


Posted by TheaterTime at 5:17 AM No comments: