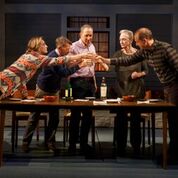 For Peter Pan on her 70th birthday

Playwright Sarah Ruhl like many writers has her share of admirers and detractors. I tend to fall somewhere in the middle. She never travels along the same track in terms of topic which is definitely an admirable trait. While I loved “”In the Next Room, or the vibrator play” and enjoyed “The Clean House,” I found both “Dead Man’s Cell Phone” and “The Oldest Boy” starting off fine until both faded into oblivion. Sadly, her new work “For Peter Pan on her 70th birthday” at Playwrights Horizons collapses almost from the very beginning which is a shame because somewhere here there is a worthwhile statement to be made about dealing with growing old.

The play begins promising enough when the always superb Kathleen Chalfant as Ann (if you have a bad play put this gifted actress in it and it helps a great deal) stepping out from the curtain with a program in her hand informing us that she played the part of Pan in Davenport, Iowa, about 40 years earlier.  She  jokes about the funny name of the director and how she really hates to fly. 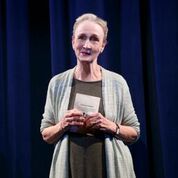 From that lighthearted moment we are in a hospital  and her four siblings’ dad (Ron Crawford)  keeping a death watch as he lies in a bed. He soon dies and most of the first part of the intermissionless play takes place while the family has an Irish wake in his home in Davenport. One thing was refreshing is that the family is not--thankfully!--another dysfunctional one. They all seem to like and respect each other even if their feelings of politics among other topics are greatly different. There is talk about Clinton--the time is the 90’s--and then about conservatism vs. liberalism. The most outspoken brother is the oldest, Jim (David Chandler), who is a surgeon; Michael (Keith Reddin) also is a physician; John (Daniel Jenkins) is a college professor plays a good bugle; and the skittish Wendy (Lisa Emery) who seems to be on the verge of tears any given moment. Ann is a college professor. The political talk seems to dissipate before they are discussing growing old and death. Meanwhile the spirit of the father sometimes walks around  and on one occasion drops something  in the home as the offsprings stare at each other in confusion and speculation.  After a while all of this talk becomes unnecessary babble leading nowhere. We really learn nothing about the family or even their dynamics together.

Then suddenly the play takes a new detour and we are in Neverland. Here things go completely off kilter and becomes quite foolish. Ann becomes Pan and I must say that Chalfant flies around with incredible grace and charm. What becomes unclear is that while all the siblings take their roles as characters in”Peter Pan” you are never quite sure if they are supposed to be adults or children. For at one moment one is exclaiming “There’s the volcano” yet at other times one of them states that he has to leave to attend to his patients. Meanwhile, Pan seems to have her own problems when she discusses her “panic attacks.” 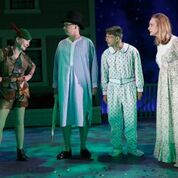 There are many ways of looking at this play--do we really embrace our childhood enough or are too impatient  to get to become adults overlooking all the little joys? While  we accept the inevitable about growing older is there a way to make it a better existence?  Despite the smooth direction by Les Waters and the dedicated performances--especially Chalfont who always has a unique ability to show an unforced depth in all of her roles, the play remains stagnant never shedding new light on much.

Tickets are available at Playwrights Horizons 416 West 42nd Street or by calling 212.279.4200. As of this date the limited engagement ends October 1.

PHOTO CREDIT: JOAN MARCUS
Posted by TheaterTime at 5:04 AM